I took this photo today (Jan 28 2013) of part of the 'dolphin' building on Vicar Lane. I noticed the date 1902 in a recessed part of the building that I don't recall ever spotting before despite walking by this building quite often. The dolphin is at the very top of the building and is not seen in the photo (I shall post a close-up of the 1902 date in my next post here). I hope this is of interest as it still surprises me just what I spot around Leeds (probably because I now look!) that I've never seen or really noticed before. 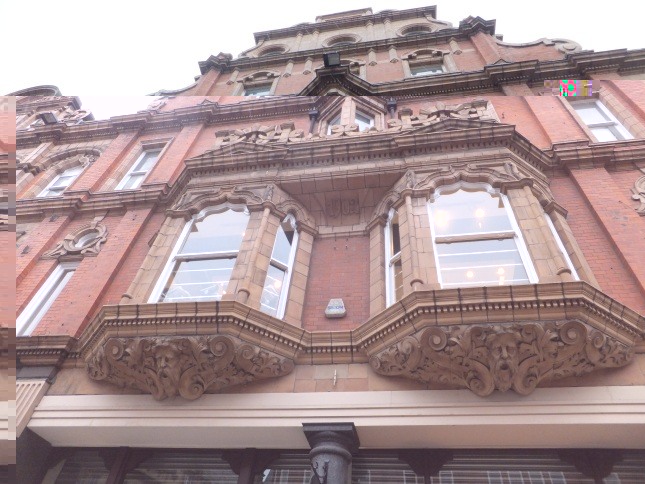 liits wrote: .... and the 1908 A = The Dolphin HotelB = The Robin Hood Inn liits, your map skills and overlay amaze me.Does this help? or is it near? Looks like the usual photo of an area pre-demo.1898. View of Fleet Street showing the Shades Inn and the Rotunda. The Shades Inn is visible on the right at numbers 19-20 Fleet Street at the junction with Leadenhall Street. In the background is the Rotunda, an octagonal building where flowers, fruit, vegetables and fish were sold. This area, including the Bazaar and Shambles, was located between Briggate and Vicar Lane and was opened in 1826 housing many butcher's shops and tripe-dressers etc. The photograph was taken in 1898 before the area was redeveloped as king Edward Street, built by the Leeds Estates Company between 1898 and 1902. The area is now pedestrianised.
Top

I've never seen a depiction of a dolphin look less like an actual dolphin!
Top

Thanks, Jogon, you silver tongued thing, you!Here is another one for you. I've had a little reprise of my October 2011 post - now that I've sobered up a bit.Looking at the previous overlay, it is a bit distorted becasue I tried to get the map to align with the footprint of the current buildings.I now realise that Vicar Lane has much altered, not only on the arcades side. The buildings oposite were also replaced, the new ones being a bit further back. I'm still not sure about it but it's getting better!I've had a stab at where I think the photographer was stood [the blue thingy] looking at the Rotunda with the Shades Inn in the background [closed 1901, the Licensee and free-holder, William Sadler, having sold the premises to the Leeds Estates Company sometime before February 1901 who did not re-apply for the License at the 1901 Licensing Sessions].
http://www.flickr.com/photos/liits/
Top

The Dolphin on Vicar Lane was very near to the Post Office and was set back a little from the street along with a couple of other shops one of which was a catalogue shop then came Sillers pram shop which was on the corner of King Edward St.
The Dolphin in the 1950s was mainly frequented by West Indians who had recently arrived in Leeds.
Top

Oops++.... Thanks Brunel "Wot can't speak can't lie. I should have known by the ornate staircase inside and Bar which matches the grand exterior. i got confused because during our nights in town we would go in the General Elliot then on to the Dolphin for an extremely quick one and finally upstairs in the King Edward before staggering into the Mecca Locarno. The "Elliot" was on a parade of very plain shop frontages which included the market post office and in my mind the Dolphin was on the same stretch. So apologies all round.
(Just wish it was 60 years ago and i was drinking in Vicar Lane area single,plenty of money smart suited etc)
Top

The General Elliot Pub i referred to was in the 1950s long before it had Greggs Bakers one side and a Nail Bar on t'other will show photo later.
Top
Post Reply
20 posts