Thanks very much Uncle Mick - I shall try and look that up!
Top

This is the closest picture I could find on Leodis.The caption reads:"Kirkstall Road Nos. 236 to 242. 29th October 1959. On the left Viaduct Place has a parked car and motor cycles, part of the business of Harold Barrett Ltd, which is on the left, out of view. Moving right is number 242 Cox Brothers scrap metal dealers, they also dismantled machinery and had premises on Talaverd Street. Next 240, 238 are houses. Leatherland dealing in luggage, handbags and repairs was on the right at 236."You have to click on the little red coss to view. Sorry. 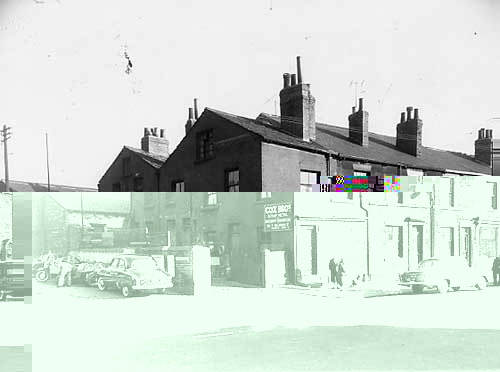 Hi Si.Thanks again!I've just been looking at the very same thing!What a wonderful site that is!And here of course!
Top

The 1872 Licensing Register page for the Viaduct opens with William Leach. [The Licensing Register was a new format to coincide with the 1872 changes to the Licensing laws, the pre 1872 versions of the Licensing Register are missing so it would be almost impossible to find out when William and Sarah took on the lease or the License transferred to William, safe to say that he is not listed as the Licensee in Whites 1866 Directory]. The License transferred to his wife, Sarah, on the 1st April 1875. She relinquished the License on the 7th May 1897.At the time that you relatives were the leases, it was a Leeds & Wakefield Breweries pub and later became a Melbourne Breweries pub. Melbourne surrendered the license at the 1923 Brewster Sessions [February 1923] to offset the alterations to one of their other pubs.
http://www.flickr.com/photos/liits/
Top

The attached map overlay, if it works, shows the following pubs,A = The Viaduct InnB = The New InnC = The Milford InnD = The Rising SunAll now closed but at least the building that was the Rising Sunstill exists.