I spent many happy time in the beech in the 1970s when Stan Dodds was the landlord and also later when John McCormack took it over. Good ale, good company, what more could one ask for ?. Sadly gone for ever.
Top

I spent many happy time in the beech in the 1970s when Stan Dodds was the landlord and also later when John McCormack took it over. Good ale, good company, what more could one ask for ?. Sadly gone for ever.

The beech is actually open for business, I was there a few weeks ago, nice decor, all features original except for the loo, friendly bar staff and a nice pint! (Midnight bell when I called)
Top

This turned up on Facebook the other day. A glimpse of The Clarendon ( mentioned on page 178 of this thread)
It was at the junction of Water Lane & Victoria Road (The Clarendon is behind the tram) 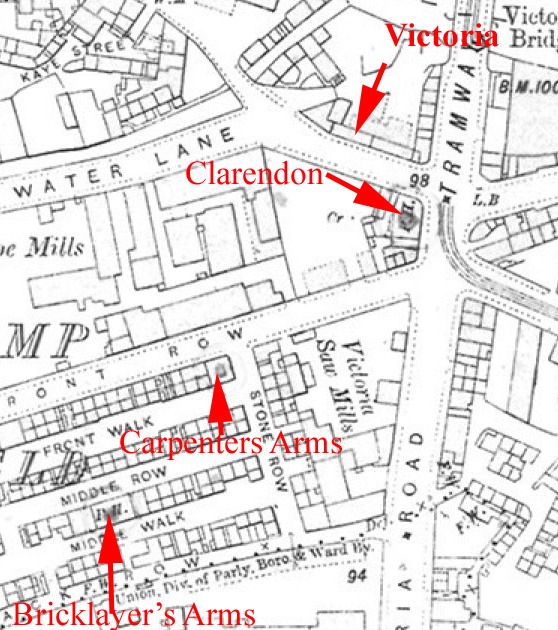 "Highfield" pub, was on Southridge Street, Beeston, and closed in the mid sixties
Top

hi jack
where in beeston is southfield st and the highfield pub,for the life of me i cant place them and me a beeston lad.
hope your keeping well
regards
sm (tony)
Top

I don't know anything about The Highfield pub but this is a link to an image in the Leodis website showing the pub in an image dated 7th July 1964 http://www.leodis.net/display.aspx?reso ... SPLAY=FULL
A rainbow is a ribbon that Nature puts on when she washes her hair.
Top

Hi snowman1 – I think that you mean South Ridge Street, as mentioned by Jack. (Southfield Street was off Strawberry Lane at Armley, Leeds 12)

South Ridge Street was situated at 104 Beeston Road to 23 Highfield Street, Beeston, Leeds 11. The street was at the top of Beeston Hill, just before Lodge Lane, but on the west side of the road. It ran parallel to Cemetery Road and Malvern Road and was in between them. All of the terrace houses in the area around the pub and the street have been demolished and new houses have taken their place. Where South Ridge Street was situated is now an area of parkland with trees.

The Highfield Pub has been discussed before on Secret Leeds:

This view on the excellent side by side mapping site should give you a better feel for where it was.
Just along Ashley place by the Malvern cinema the turn left up Westmount St to get you in the general area.

hi there
thanks to tabbycat /iansmithofotley/leodian.
thanks for the info re the highfield pub,i was born in cross flatts st the top side of the park and that area of beeston was not one i frequented very often.
regards
sm1
ps our new wetherspoons pub in cross gates is delayed yet again this time the contractor has gone bust.
Top

Snowman, I too lived in Beeston and never knew the Highfield Hotel until l took a small shop (14 shillings per week) just below the hill. The butcher next door used to drag me into Joe Hurd's pub.

I have a telephone bill dated 8th March '67. Joe became a greengrocer in Theodore Street about that time.

For some reason I cannot post a scan of the bill ( as too big!) although only 6 x 5 inches and would appreciate any suggestions of how to show this.
Top
Post Reply
2772 posts