If I'm not mistaken it was at the junction of Boar Lane and Trinity Street. But I could be wrong.
Daft I call it - What's for tea Ma?
Top

Boar Lane, about where the Square On The Lane is, or possibly closer to Trinity Church. Peter Robinson was a follower of Leeds's Traditional Jazz bands and would probably remember the pub from that.
Top

It's here on the left, just before C&A. 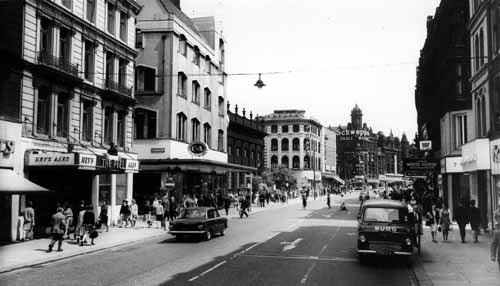 They used to have jazz there in the sixties. I seem to remember John Lee Hooker performing there.
Industria Omnia Vincit
Top

Trojan wrote: They used to have jazz there in the sixties. I seem to remember John Lee Hooker performing there. BOOM BOOM BOOM BOOM! lol
There are only 10 types of people in the world -those who understand binary, and those that don't.
Top

Hi Hollie,Check out the thread 'Leeds Jazz in the 60's'Also, Peter Robinson and I were classmates at West Leeds Boys High and both went to the Leeds Judo Club in Parliament Tce, Armley -early 62-64.I've recently been corresponding with him via Friends Reunited.Cheers
Top

I remember the Peel quite well.We were kicked out of there around 1967 (aged 15) one of my mates, Johnny Masters was smoking herbal tobacco and the landlord assumed it was cannabis.I got drunk on a pint of mild back then. Just up Boar Lane was the Kohinoor Indian. We used to get the hottest vindaloo there....
Top

My name is Shane and I used to work downstairs in the Peel with Bob on the back door.We'd have to mop about two inches of standing water from a leaking road-drain, before we could open up. I'm sure Health & Safety would've closed the place in a flash. A guy called Mick, and his chick Sharon used to collect glasses. Barbara or Betty used to run the decks, they also did a similar disco on Tuesdays in the Cemetry opposite St James hospital.A pint of Websters' Best was 17p!!! 20 Players' No. 6 were 21p, you could have a great night out for less than £10 and then off to the WigWam in the Merrion Centre, where I met the lost love of my life, a wonderful girl called Kathryn Ball (Sandy) from Horsforth.
SR
Top

Was Mick the glass collector the same guy who use to crunch glass in his mouth and swallow it, he also used to empty ashtrays into a pint and down it in one.
Top
Post Reply
24 posts