by jihfadiuh
Further to this post ive been reading about a murder that happened where the Southleighs are now at a cottage named Scurrs House , marked on 1846 map of Beeston, then Parkside Cottages. Photo on Leodis 20171115_176359 shows two brothers in 1930 standing outside the house but can see only a bit of the actual house unfortunately.

My question is, one of these men was executed on Holbeck Moor and his body was hung in chains on the site of the execution which I think it said was attended by 30,000 people, I know where Holbeck Moor is and realise a lot has changed in the years since 1682 but could anyone visualise or have a good idea where the execution would likely have taken place, the reason I ask is that not far from the Holbeck Moor that I know there is Stocks Hill where I presume were located some stocks, so started thinking if there would have been a site for these types of punishments to be carried out within holbeck and is where people were put in stocks, and could Stocks Hill be where this execution may have taken place?

by tilly
Great post jihfadiuh it would be interesting to see if any one knows the answer.

by tyke bhoy
Stocks Hill LS11 9PB is currently a continuation of Nineveh Road between said and the T junction that also includes Pleasant Street and St Mathews Road. On an 1850's map it is shown in a similar position. Bearing in mind we are post industrial revolution there is a fair bit of housing between Stocks Hill and Holbeck Moor but I don't think its a massive stretch to think that 170 years earlier and pre any industrialisation in Holbeck that the Moor stretched that far. Other than that I can't really offer any proof. Maybe some of our contributors have access to older maps which may prove or disprove that Stocks Hill was on the Moor.

by uncle mick
This mentions the hanging taking place on Holbeck Green, is this Holbeck Moor or another place ?? 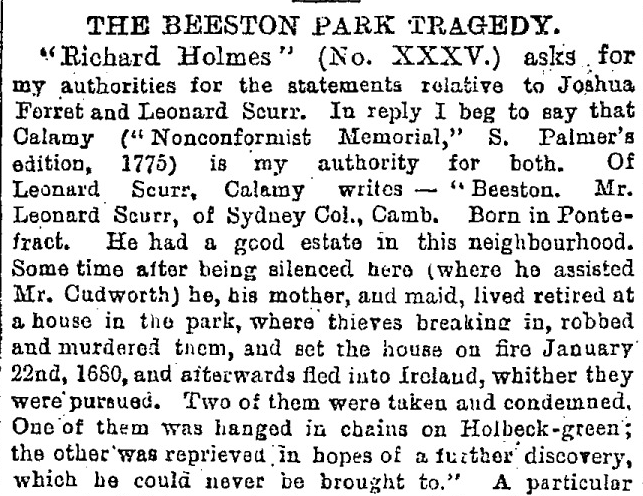 by blackprince
It was interesting that even in 1680 villains were using arson to obscure their crimes. Despite being "forensically aware" the murderers didn't fool CSI Leeds

. I am amazed that they were apprehended after making their escape to Ireland. How could they do that with no police force , no communications apart from letters , no transport faster than a horse etc. ?

by jihfadiuh
very interesting bit of information prince thank you, so Holbeck-Green is where it took place, im sure I saw on an old map that Holbeck-Green was the moor to which we know, on Leodis under photo 2011411_171994 of the Kings arms someone says there was a police station opposite situated on Stocks Hill, I would presume then that there would be stocks located in this particular area but now sadly gone and would possibly hint at people being punished there. There is surprisingly very little information regarding early or medieval Holbeck.
All times are UTC+01:00
Page 2 of 3
Powered by phpBB® Forum Software © phpBB Limited
https://www.phpbb.com/