The green spaces and places of Leeds
Post Reply
21 posts

I'm fortunate to live in a part of Leeds which is surrounded by multiple areas of woodlands(see map above). I'm surprised that Leeds city council hasnt made more of this resource besides the usual signposting in certain woods. I have often thought how great it would be to create a series of walks / mountain bike trails that would link these areas of woodlands and create a circuit that could be completed in the day or just have certain sections that could be walked / cycled in shorter times periods. Quite a few of these woods as well as being beautiful deciduous woods with year round interest have areas of interest to 'Secret Leedsers' - derelict buildings, industrial heritage, Kirkstall Abbey tunnel entrances etc. When I started going to what was then Trinity and All Saints college back in the late 1990s I used to take the 655 / 755 bus from Headingley up to Horsforth and I was amazed at the large woodlands I passed by en route. I've now lived in the area for over a decade and it still astounds me that these huge inner city woods still exist and are for the most part neglected and not particularly promoted for leisure use. I've got the kernel of an idea to create something, maybe a facebook page or website of my own with maps and photos etc outlining potential routes that could be taken to explore these woodland areas with a view to creating routes to link these woodlands by passing through the least built up areas as possible. Many of the woods can be linked merely by crossing a minor road and entering the adjacent woods. Plus it might be advantageous to a longer journey to be able to take a minor detour to access shops / pubs etc en route for refreshments etc. One favorite of mine is The Bridge pub on Low Lane in Horsforth and this is a convenient linking point between Hawksworth Woods / Little Hawksworth Woods and Fillingfir Thicks by way of a short detour down Butcher Hill.Most of these woods already have established footpaths and trails that could be used to devise a longer series of routes. I'm constantly amazed how deserted many of these woods are even at the height of summer and on weekends and bank holidays. I guess people head furthur out of the city or go to more glamorous locations - Roundhay Park etc which can be swarming with crowds. Other than the odd local dogwalker its rare to see anybody. Anyway here is a list of the woodlands I have in mind to create a series of routes through:1.    Clayton Woods2.    Ireland Woods3.    Cragg Woods4.    Hawksworth Woods / Little Hawksworth Woods5.    Iveson Woods6.    Spring Woods7.    Backhouse Woods8.    Daffy Woods9.    Fillingfir Thicks Woods10.    Bramley Fall Woods11.    Newlay Woods12.    Toads Hole WoodsI think most of these woods lie inside LS16 / LS18 with a couple inside LS13 which would involve crossing the river Aire at Newlay Bridge and walking up Pollard Lane (handily past The Abbey Inn!). I've thought about calling it "The Nine Woods Walk" which has a cheesy alliteration to it and it would involve whittling down the list to 9 woods obviously. Anyroad, if anyone has any thoughts or suggestions please let me know what you think. Maybe I ought to keep this crazy idea secret as it might just be a daft idea. 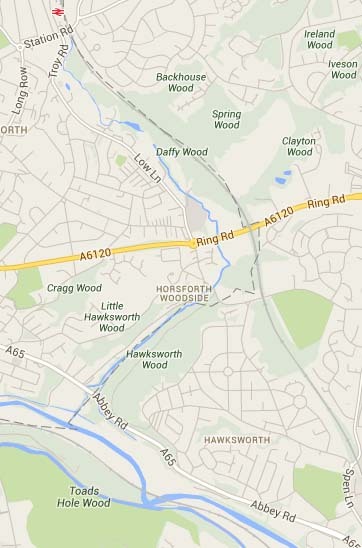 It's a good idea. There are some privately published walks in various areas - I have a little book that covers Yeadon, Guiseley, Otley and the Chevin and is quite nicely done, although a couple of the walks were out of date when I did them due to new houses being built. Arm yourself with a good knowledge of rights of way though - I was surprised to find that much of Hawksworth Woods is actually private land, for example (can't remember if that was through here or through geocaching).
Top

Hi jon. As you say, there are many woods, of various sizes, in Leeds. Many of their names seem obvious but some are not and are intriguing. Why for example just to use your list are Spring Woods, Fillingfir Thicks Woods and Toads Hole Woods so called? Daffy Woods may be daffodil related?
A rainbow is a ribbon that Nature puts on when she washes her hair.
Top

I think your idea is a good idea, im always out and about in the green spaces of Leeds (Rodley). If you need any help i would be more than happy to help out with routes and things to see and the like.Alot of the Woodland has many interesting secrets in them most are not very far off the footpaths. Walking along the Canal for instance just detour into the bushes at the right place and you can be a 100 years into the past. Not to mention the wildlife...
Top

Some of those woods contain ancient scheduled structures, markers and stones, so that building there would, at the very least, require a private members bill in parliament - this can be a lengthy process and generally its only in the interests of specific groups or where there is a pressing national need for a response to some legal crisis.The upshot is that these woods still survive.There are still remnants of Moseley Woods that might be worth including, none are large but they are linked by pleasant enough pathways and walks. You might also include Pinfold woods at well. If you have cyclists in mind, then you might also want to try link up toward Otley, you can find various paths, bridleways and public routes around the Chevin, back toward Cookridge, and along the woods at the bottom of Troy Hill toward Horsforth, from there you can go one way to New Road Side, or toward the Clayton Woods, Moor Grange way and the back of Carnegie College - that'd take you to Headingly. There are lots of ginnels and the like which would take you to Hyde park.
Top

Hello JonI also live in the north of the area your maps covers, if you require any help with your project I am willing to help. I remember as a kid riding my bike in Clayton Woods, that was well before the days of Mountain Bikes or even BMX.John
Lived in Leeds all my life, Cookridge Headingley
Top

Thanks folks for taking interest in my crazy scheme, I'm a bit stumped at the moment with the footpaths / rights of way issue. I have several maps of Leeds, but these are mostly the A-Z type and not large enough scale to show footpaths and rights of way. Google maps doesnt seem to show footpaths. What, if any resources are there online that show larger scale ordnance survey maps of the type I require? I used to have some excellent Multi-map Cd's but they covered the Yorkshire Dales and Lake District. Is there any similar map service which is accessible online that anyone can think of? I've never designed any kind of map / route / trail before so I'm a bit puzzled by this, although in reality I'm not going to be blazing any new trails, I'm just wanting to outline and link existing ones in a way that connects particular areas of woodland. I dont know whether to create a series of routes arranged via length or time taken to walk / cycle etc. I was thinking about maybe colour coding them or naming them after areas they pass through. I know from experience its completely possible to spend many hours wandering through these areas without retracing your steps and there are some great viewpoints to take in as well as interesting features and landmarks. Anyway I'll post up any progress I have made in due course!
Have your fun when you're alive - you won't get nothing when you die... have a good time all the time! - Chumbawumba!

Hello Jon,This may be of help to you. http://share.mapbbcode.org/I understand that the new SecretLeeds website will use this mapping system as you can put you own overlays on it.Use the cycle map option, and you will find a lot of cycle tracks have already been plotted in the woods you mention.
Top

Great stuff, should help me out - thanks!
Have your fun when you're alive - you won't get nothing when you die... have a good time all the time! - Chumbawumba!

And no matter how things end, you should always keep in touch with your friends - Dave Gedge
Top
Post Reply
21 posts