The mysterious "Battle of Meanwood" in the Civil War

The green spaces and places of Leeds
Post Reply
29 posts

Here’s a mystery I’ve been meaning to post for a while.Opinion is split down the middle about whether a Civil War battle occurred in Meanwood. The rumours are that on 23rd January 1643 a battle took place at the foot of Woodhouse Ridge, in Batty’s Wood, not far from where Woodhouse Cricket Club now stands. Various local history books document the battle as taking place, whilst there are others which are more sceptical. For example, the following is from “Meanwood” by Arthur Hopwood"If The Battle of Meanwood' were not mentioned, many would consider the omission a mistake. They would point to the evidence of the 'Stainbeck'-the legend being that the stream ran red with blood - and to the musket balls, so many of which have been picked out of the beck at the foot of Woodhouse Ridge - or Pikeman Ridge, the suggestive name by which it was known in 1781 There may have been a Civil War skirmish hereabouts on 23 January 1643 but it can hardly have been a 'battle' - there is no documentary record of the incident. As for the circumstantial evidence, the name 'Staynbek'(i.e. Stonebeck) first appears in 1240, some four hundred years too soon, and Pikeman Ridge, or a very similar name, was used in 1561 - a hundred years before the dale in question. As for the musket balls - their localised concentration suggests target practice rather than the spread of shot to be expected after an armed encounter."This is the other side of the story from “A history of Headingley” by Christopher Gardener"Some historians have linked the name of the part of the boundary between Headingley and Leeds which runs from Hyde Park Corner to Woodhouse Ridge along the line of Cliff Lane and which is called Pikeman Ridge with the battle in Batty's Wood and Meanwood Valley. It is quite a coincidence, however. Pikeman Rigge was surveyed by a royal commission and reported in a document of 1612, and an earlier boundary commission in 1561 also reported the name of Pate Man Rig for the same part of the boundary between-Headingley and Woodhouse. So the name Pikeman Ridge, is far older than the Civil War and it is pure coincidence that a thousand Parliamentarian pikemen were in action only a little way from the place. The word Rig found in the earliest records, means hedge and not a ridge in the modern sense."Then there is a large history of the battle itself which is written by Walter Gill in his book “Woodhouse in Leeds”. I’ll post it later if anyone is interested, but it takes a bit of reading. Where did all his research come from if the battle didn’t actually take place?There must be plenty of rumours and places kicking about to do with Leeds in the Civil War. Anyone got any pics or info?
Top

According to Leodis...a musket shot was apparently found in the location you're referring to, thought to be a left over from a civil war skirmish.As it happens, I do have a few pictures of an old air raid bunker from the exact spot.
Top

JanCee wrote: Not much help am I? http://www.royalarmouries.org/extsite/v ... ionId=2629 I wouldn't say that. Escaped by swimming the river suggests they were fighting with their backs to it (or pretty close to it). Not something you would associate with a battle in Meanwood (2 miles + from the Aire). Also given it says blizzard I doubt if a battle that started in Meanwood would have ended up close to the river and if it wasn't close to the river then there would have been many other escape routes. Of course all that is just theory so it doesn't completely rule it out but at least suggests it unlikely Leeds fell due to a battle in Meanwood.
living a stones throw from the Leeds MDC border at Lofthousehttp://tykebhoy.wordpress.com/
Top

Leodis seems to think that Royalists were on their way to attack Parliamentary forces in Leeds which suggests a different and later "battle" as the one Jancee's post describes is the Parliamentarians taking Leeds http://www.leodis.net/display.aspx?reso ... 5_78440494 . Other reseach also suggests battle is a rather Grandiose term as it was more a minor skirmish
living a stones throw from the Leeds MDC border at Lofthousehttp://tykebhoy.wordpress.com/
Top

tyke bhoy wrote: Other reseach also suggests battle is a rather Grandiose term as it was more a minor skirmish That's the point though Tyke Bhoy. All the history books that mention any sort of skirmish / battle still have no documentary evidence to rely on. So even if it was a battle rather than a skirmish, it's still a mystery whether the thing took place at all.As with other stories, it seems to me that people have taken rumours and what has been written in other books and taken this as fact. One account I've seen even has an artist's impression of how the battle would have looked (pretty good if true, as some of it would have been fought in my garden).
Top

Hi all,Well we know there was a battle at Adwalton Moor near Drighlington, and I have read Parliamentarian forces rested on Hunslet Moor before they attacked Leeds (buoyed by Local 'Clubmen'). But there is no reason a battle couldn't have taken place at Meanwood as the royalists were chased out of Town.Get time team in to dig for bones in your yard!
Top

From what I can remember, the main battle/ skirmish was down by the river along the aire around Kirkstall abbey way. The Parliamentarians approached from the west of Leeds along the river valley and met resistence near the abbey? A smallish battle ensued and the royalists were pushed back along and into the river. No more resistence was found in any great number!It's quite possible that other skirmishes broke out elsewhere in the city as troops fleeing were being pursued! I'll dig out my old books and get a better description later!
I WANT TO BE IN THE "INCROWD"

When the last bit of wall standing on the Royal Armouries site was demolished the Sealed Knot marched through the city centre with a small cannon and fired a shot at the bit of wall. As a member of the Royal Armouries Support group (defunct now) I joined in with the march and I asked the Sealed Knot about the "battle of the Ridge" as we had always called it. The Sealed Knot described in great detail both the Battle of the Ridge and the Battle down by the river so it sounds as if there were at least 2 battles in or around Leeds. Don't know if that's any help!
Top

As a child, we were always told that the mound in the middle of the public fields below Carr Manor was a burial mound from the Civil War.See http://www.leodis.org/display.aspx?reso ... 2_80891055 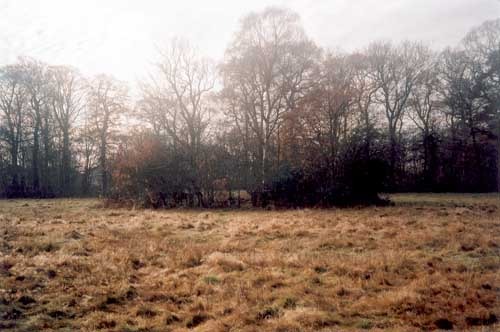