Hi,
Just wondering if anyone has any information about the murderer of Lynn Lumb in Leeds on the 9th December 1965. I google searched and found Edward Alan Roche was named in relation to this. Does anyone know if it was him? How long he served? How old was he at the time?

This topic has ben mentioned before on Secret Leeds, but there is not much information on it:

Much the same question was asked back in Jan 2010 by John Croggy.
Cardiarms came up with this link;
http://discovery.nationalarchives.gov.u ... 79&catln=6

Oops iansmithofotley beat me to it while I was having a look on Ancestry. I can't seem to find a birth for Lynn Frances Lumb.
http://www.flickr.com/photos/liits/
Top

Thanks, I did come across that post while searching. I'm more interested in the murderer because he shares the same name with my grandad and also from same area.
Top

From The Times 15th March 1966, seems he had been in trouble before http://www.britishnewspaperarchive.co.u ... an%20roche I think this is the same man married to Kathleen Kelly in 1956 & Sandra Thornton in 1977. On searching he seems to have been born in Leeds North in the last quarter of 1932 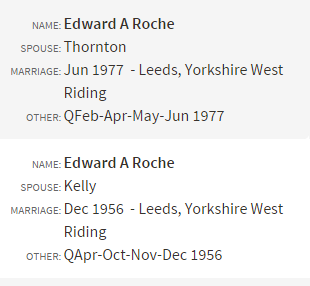 If that is the same man that is my granddad
Top

Lynn lumb was my grandmother on my mum side.my mum discovered her dead body on her 6th birthday.there is a gagging order on the trial/court informations,and it isn't available to the public
Top

Is it possible to explain why there is a gagging order ?
Is this a common thing in murder cases.
Family search.org shows
Lynn Frances Limb as a passenger on a ship from
Auckland to Southampton in 1958 with an approx birth year
of 1930 which seems to fit to her age when
she died.
Consciousness: That annoying time between naps.90% of being smart is knowing what you're dumb at.
Top

Sorry Lumb not Limb as typed above,Android touch like an elephant sometimes
Consciousness: That annoying time between naps.90% of being smart is knowing what you're dumb at.
Top
Post Reply
13 posts