Looking through some photos I came across one that by chance had a Bendy Bus in view. The photo was apparently taken in Leeds on November 9 2008 but that seems too early that I think they were in use but I've been unable to readily find when they were brought in. Does anyone know when they were first used? Thanks in anticipation.
A rainbow is a ribbon that Nature puts on when she washes her hair.
Top

I thought it was much earlier than 2008 Leodian but there is at least one SL thread (here is a selection https://www.google.co.uk/search?q=%22pu ... tleeds.com ) mentioning them in 2007. It also suggests they have been gone for almost 6 years.
living a stones throw from the Leeds MDC border at Lofthousehttp://tykebhoy.wordpress.com/
Top

Thanks for that which is appreciated. If I had been asked I would not have guessed that the Bendy Buses in Leeds appeared that long back, so at least 15 years back now! But then it's already 63 years since the last tram ran!
A rainbow is a ribbon that Nature puts on when she washes her hair.
Top

The Wrightbus Eclipse Fusion is an articulated version of the Wrightbus Eclipse, the replacement for the Fusion. The bus was launched in 1999 with the first versions to be put into service in Leeds on the 1 (Brown Line). The vehicles were later painted orange for the university link 95 service in Leeds. Shortly after, Centre bus bought the contract for the uni - link services and Firstbus re-painted the buses into the Urban Livery for service on route 1.

Following the cancellation of the Leeds Supertram project, the local passenger transport executive Metro suggested various bus rapid transit options as a replacement, one of which was an FTR service. The FTR system was chosen, and the service ran from early 2007 until autumn 2012, on Route 4 'Olive Line' (part of the Leeds Overground colour-coded network of high frequency First Bus Routes) between Pudsey and Seacroft via City Square. The FTR buses were then refurbished, Wi-Fi installed, and given a new livery branded ‘’Hyperlink’’', for the new high-frequency service on route 72 Leeds to Bradford.
In July 2016, the FTR articulated buses were replaced by brand new Wright Street Deck buses, with the Hyperlink livery withdrawn. 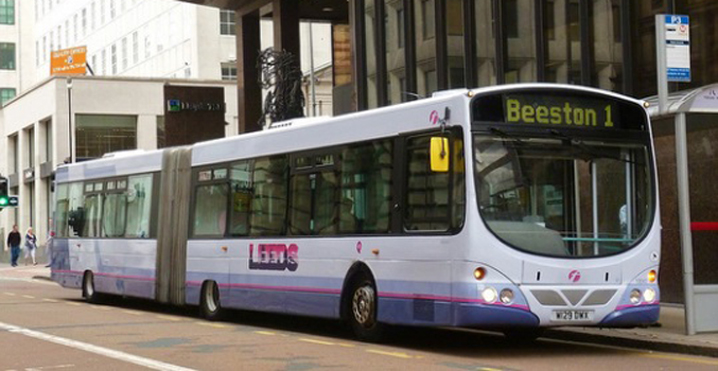 The number 4 ran past Jimmys from Pudsey i think it was a bit of a problem for the bendy bus after Jimmys so they had it turn past the Anglers Club.When they replaced them they never rerouted the number 4 past Jimmys it was a very handy stop for a lot of people needing to go there.
No matter were i end my days im an Hunslet lad with Hunslet ways.
Top

Baffled by the abbreviation FTR, I found this.

Thanks buffaloskinner for that very informative information.

Thanks also to tilly and jma. In the information about the ftr in the link that jma provided it states 'The vehicles were branded as "the future of travel", the operators claiming that ftr is Abjadic textspeak for the word future'. Looking at the "Abjadic" link in that I found 'Abjad is a writing system in which only consonants are represented, leaving vowel sounds to be inferred by the reader'. Well that's something that I did not know! So why does Abjad have vowels!

For those who don't speak Abjadic!
Top

It's getting away from bendy buses (bndy bss?) but I think leaving out most of the vowels is a trndy way of making a lot of money. One recent example of this was when Aberdeen Asset Management became Abrdn (the A was retained) and media reports suggested the cost was y wtrng
Top

A rainbow is a ribbon that Nature puts on when she washes her hair.
Top
Post Reply
13 posts