The location of this tram is puzzling me, for some reason i am stuck with thinking it may be Elland Road with the old greyhound track behind the photographer, Leeds Utd west stand to the right where advert is. The destination on the tram seems to conflict with this location though.Any help much appreciated. It looks like there is a circus tent halfway down the left side but it certainly looks out of the way. To the right of that is a darker area. Could that be a bridge under a railway embankment, the London/Doncaster line perhaps?

Bearing in mind I was born almost 5 years after the last tram in Leeds ran my knowledge of routes and the landscape at the time is somewhat limited. I did think that the Middleton tram via Parkside ran mainly on dedicated track once it veered off Dewsbury Road at Moor Road(?). However if there were Road stretches could that be a cricket ground directly behind the tram, there may be a site screen in front of what certainly seems to be the stand of a stadium. I'm thinking Parkside Rugby and Cricket Grounds. On top of I didn't think there was any road at this stage of the route there is the added thought that it all looks too flat as the climb to Middleton would start almost immediately and there is little evidence of the climb Dewsbury Road goes through after the short dip after the fire station.

One final point. It may be the quality of the phtograph but there is a fuzzy skyline above the top of the rise/embankment behind the tent and white buildings. It is impossible to tell if its a tree line (woods?) or houses on slightly hire ground.
living a stones throw from the Leeds MDC border at Lofthousehttp://tykebhoy.wordpress.com/
Top

Not Parkside, which was on the reserved track to Middleton, not a road, and this shows a terminus as the track ends to the left of the tram. When trams in Leeds reached a terminus the indicator blind would be changed to show the next destination and the route number of that point. For example, trams arriving at Kirkstall Abbey (route 4) might change the display to Moortown (route 2) as that would be where it was going next, so this may well be the case here. There were also cases in which small boys on the top deck of the tram would alter the destination blind when they assumed the driver wouldn't be aware (exits whistling innocently)
Top

There used to be a large area of waste land around where the Hunslet rugby ground used to be. I don't remember the detail very well, but I jumped to the conclusion that that was the Parkside on the tram's destination.

I've found this on Leodis, which shows RL spectators at that ground queuing for no 12 trams.

I would think that jma. has nailed it, everything in the picture is right.
as for the picture shown first of all the waste land was never like that. the area was a series of small hills and kids used to ride their bikes up and down them. On a Sunday we used to watch a couple of Beeston men with a ferret and they used to put the animal down a rabbit hole and cover a few other holes with nets. I recall that they used to sell them outside the Punch Bowl pub on Town St. One of the two men was called Des Horner and he used to sit having a pint with the ferret inside his shirt Don't think that was United's stand with the Scotch advert and there certainly was not railway arches on that land. The railway line runs over Elland Rd. just as it bends. The spare land was in later years turned into mainly wholesalers and they stopped near to Uniteds Fullerton Park. there seems to be a wire fence along the spare land which i never ever saw in those years.
Top 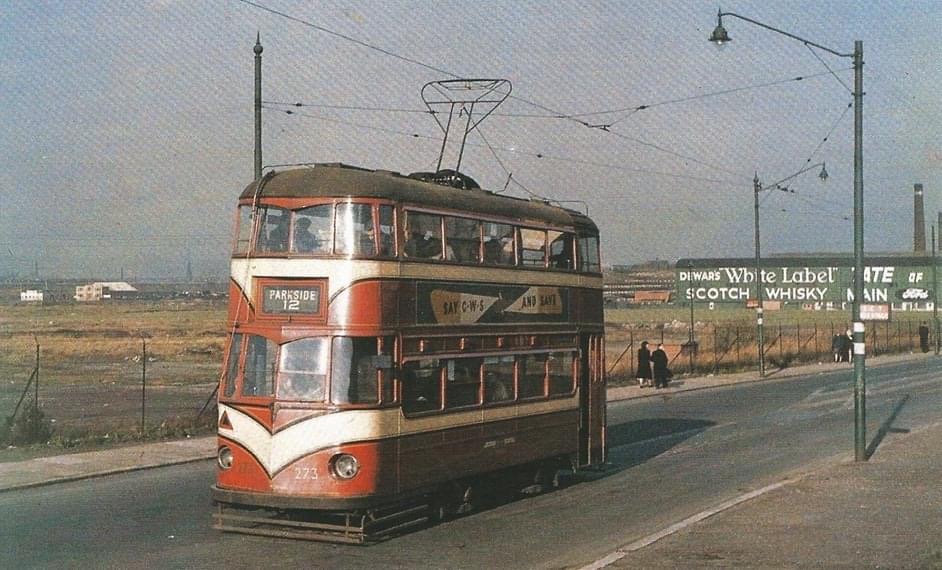 Wow Uncle Mick, great Columbo Skills there, I have been looking for ages to find corroborating evidence to support the Elland Road location. On the back of the original photo it has "Torre Road?" written on it, I knew it wasn't there but No12 Parkside desty was throwing me a bit.
The 2 pics you have posted are great, the colour one obviously taken just before or after the b&w one. (If there are any more great pics like this do you have a link to where you found the coloured one?)
The only pic I found was the one attached which shows the lampposts on Elland road at the side of the dog gtrack which match the one in the tram pic.
Re Tyke Bhoy, the bridge in the distance left of tram is the now disused railway bridge over Gelderd Road, close to the far end of Lowfields road.
I suspect this was an enthusiasts tour of the tram network, I know that they liked to get the trams as near the end of the track as possible and this seems to be the case in the photo, this would also explain he destination anomaly. I found the photos on Old Time Speedway on FB