tilly"Hi Jack i remember that scrap yard it was still there when we moved to Saxton Gardens from Hunslet in the late fiftys the car was above the entrance on a girder.

Did you ever visit the Railway Pub just by the Bridge tilly. ?
My Grandmother used to collect her W.W. 1.War Widows Pension from the Marsh lane Post Office and my Mother often used to send me with her to collect it. Problem is i can't remember just where it was.
Top

That is a fabulous photo, The poster shows an ad from for the Paramount Cinema which became the Odeon on the Headrow in 1940 and i do think that yard.is exactly as i recall it, Don't know what happened to the couple that were in the motor in the mid forties.
Top

Well Jack you must have had one too many in the Old Railway Pub as the Post Office was next door. 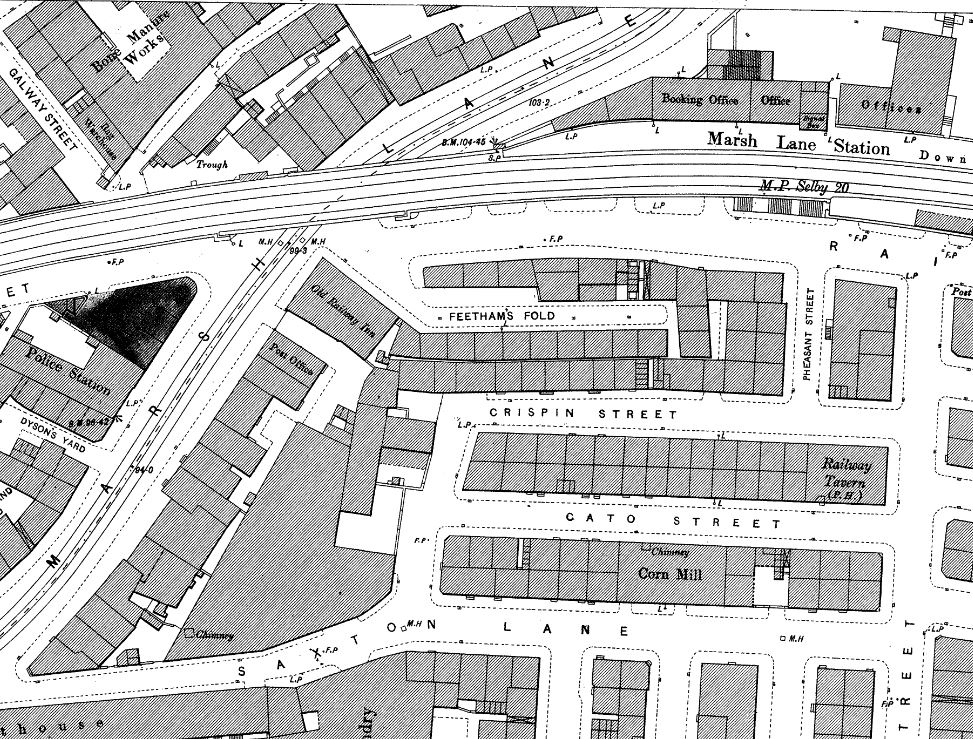 Oops, although at my age i do have quite a few memory lapses, in this case i do have a slight excuse.The year i was born (1935) virtually all the Bank, Richmond Hill residents were moved en bloc to the newly built Gipton Estate as part of the Slum Clearance. My Grandmother had been receiving a W.W. 1. Widows Pension and did not want to transfer from the Marsh Lane Post Office. Usually my Mother used to accompany her down to collect it but when i was about 10 years old, on the odd occasion I would go with her instead. I do remember we used to get off of the Tram somewhere opposite Quarry Hill Flats so am been a bit vague
In later years, i always remember that Pub being nice and clean looking from the outside but when i became old enough to drink in Pubs they had to be like the ones with Music in etc. so never had the pleasure of having a drink in there
So apologise once again for the gaffe.
Top

Great Photo, I see from the Poster advertising the Paramount Theatre that not only did they show a feature film but they also had a series of live variety acts on stage beforehand.
Also the Poster with Cary Grant showing at the Hill crest, Cinema, Harehills Lane.
all these were only six nights only.
Top

The Hunslet vs Salford match was 23 February 1935
Is this the end of the story ...or the beginning of a legend?
Top

The earliest Hunslet Match I remember seeing at Parkside was about 1948 when The Parksiders beat Hull K.R. 18 pts. to 10. (might have been the (other way round) My Brother and I spent more time at Elland Rd. In the winter time it was usual to see the Pitches covered in ice and snow, so if anyone arrived early on Match day they could go on the playing field and help clear the snow. The good thing was we then got in free.
Also then we were allowed to be in the Elland Rd. end which was under cover ( a real bonus )
Top

Hi Jack i remember the Railway Pub but never went in i was too young when we moved to Saxton Gardens.The area around there has changed so much, i had an appointment at Jimmys one evening on the way back they had closed the ring road so i was diverted past the bus station i thought i will go up Black Bull Street.There was quite a lot of traffic and trying to look at the road signs i got lost finished up on the M621? never thought that could happen to me this area was my stomping ground in my youth.
No matter were i end my days im an Hunslet lad with Hunslet ways.
Top

Richburnley"]Just past St Annes Centre on Marsh Lane where there are some road repairs, more tram line has been exposed

Hello Rich,
Regarding the Pictures you were having trouble showing on here, perhaps as Leodian is standing by with his Pictures you might decide to to give him the go ahead.
Regards Jack Daly.
Top

Though i did vaguely remember the Old Police Station on Marsh Lane junct. with Saxton Lane i had no idea that it was used for housing Homeless Families into the early 1970s and looking at the Grim photos and reading below the even more Grim comments below it makes me thankful that i was never in that position.
One good thing from that old photo is that it shows a clear view of the Tramlines.
Top
Post Reply
40 posts