A little question to give you something to think about.

I have just been doing some research into the last trams to run in Leeds, you may all know the answer to this but did you know there were 5 trams and two works cars still in Leeds for several years after the closure?

Do you know their fleet numbers and where they were stored and which was the very last to leave Leeds soil?
Last edited by MiggyBill on Wed 19 Jul, 2017 8:02 pm, edited 1 time in total.
Top

I should think the single deckers were some of the last trams in service. Has for double deckers i have not a clue hope you get an answer.
No matter were i end my days im an Hunslet lad with Hunslet ways.
Top

[quote="tilly"]I should think the single deckers were some of the last trams in service. Has for double deckers i have not a clue hope you get an answer.

I seem to recall a sSngle decker turning from Hunslet Road towards Town by the Junction Pub on Dewsbury Road. thought how smart it looked with the City Coat of Arms on. would think that would be early 1960s. ........ Or is it time for my tablets Nurse ?,
Top

Hi Tilly, saw a couple of your comments on Flickr under your other "Nom de plume" just recently, seems we have the same interests. I've also left comments on Flickr but under my usual Billy Britvic monicker. Used to use it in here but after the site update a while back I had to make new account to get back on. I'd exchanged comments with Blakey on here and on Flickr before realising he had 2 internet names.

Perhaps we should make a list of all the ways last tram can be interpreted. ie Last to run in service, last to enter Swinegate, last "foreign" tram to run, last to run in Leeds carrying fare paying passengers, last to remain on Leeds soil? the list goes on, I'm a right tramarak I know, but gives me something to research.

ps, I think I know most answers but willing to learn more.
Top

The Leeds Transport Historical Society website has a mass of useful information.
Top

). As for last dates I don't know but it is amazing now that as the last running of the trams was (I think I'm right) in 1959 then anyone under 57 will never have ridden on the Leeds tram network. Mind you, that year is only 7 years before England last won the football World Cup!

Leeds trams are one of my favourite subjects, pics, films, stories, memorabilia, you name it and I'm interested. I've even got tram lines reclaimed from outside Stephensons on Hunslet Road when roadworks had necessitated their removal onto a spoil heap at the side of the road. I have them set in the patio! Sad I know.

The reason of this post was just to give other Leeds tram lovers something to think about.

A while back I came across the attached pic showing trams stored in Clayton's Yard Hunslet and it got me into finding out exactly which trams were in the pic, what happened to the trams and where did they come from. This led to finding info, more pics and everything to do with Middleton Railways involvement with trying to preserve them and why most of them perished. 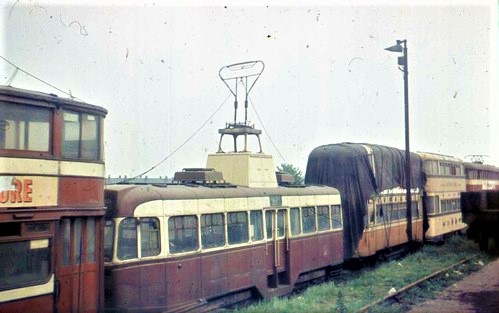 Good Morning Bill,
Depending on your age do you remember the older Tram that had upstairs just bench seats each side of the aisle, two iron struts and a piece of wood across for the Passengers to rest against. Once the Tram reached the Terminus the seat back were quickly pushed ready for the next journey. When we were kids in Beeston we would go to Middleton Woods and take the Tram back down to Dewsbury Road ( Junction Pub) and as there was usually no one else coming down we could slam all the back rests upstairs, saving the conductor a job, I recall the ride down through the Woods was quite something as it picked up speed.

I did post somewhere earlier that going down York Road in the 1940s those Trams with the open front, back and front upstairs were wonderful to us kids regardless of the weather.
Happy Days.
Top

First hi Bill i always look at your photographs on flickr always give you a like star.You are right about us having the same interests but then we were kids at the same time thanks for your reply.Hi volvojack the tram ride through miggy woods was like being on the big dipper at Blackpool i must say i did more walking than riding used to walk up the niaga line dont know if thats how you spell it, joined it at Jack Lane up to the coal staiths on Hunslet Moor. The tram did a right there up to miggy we would walk past Park Side rugby ground up to farmer Wards field the leave the track and go up to miggy clearing good days.

Hi Tilly, unfortunately the only memory I have of the trams when they were running is waiting with me mam to catch one to town from Middleton, she told me off for standing on the lines! No memory of actually travelling on one, mores the pity.

However my first proper memories of trams are when me dad used to go looking for scrap metal and the like usually down Parkside but in all the slum clearance properties, and there were a lot in the 60's even in the old warehouses down the Dock Street area and the prefabs at Cottingley.

He worked regular nights at Miggy Pit or Broom Colliery to give it it's correct name, for 30 years, and during the day he would tend to the horses, pigs hens etc. down at his yard on Thorpe Lane or go tattin with his horse and cart for rags and scrap metal, (he also had a fruit and veg round on the Middleton estate). On several occasions we ended up sitting on the old trams stored at Parkside where we would have our "picnic" which consisted of a pork pie or a lump of savoury duck or polony. I loved pretending to drive them and swinging the seats over, going upstairs on the double deckers, (for years I thought the massive Swansea and Mumbles No2 was a Leeds tram, well it was red!) they were still in good nick at this time windows intact etc. This will have been 1960 61 and 62. Then a few years later I started at Cockburn High School and used to walk home from the playing fields past the back of John Kings / Claytons and even at that age I was saddened at the sight of the deteriorating trams. I watched the whole sorry affair first hand and was gutted when they had all gone. Still are I suppose.

This is probably why I have such an interest in trams, especially the ones at Parkside, ahhhhhh happy memories, I could go on and on.
Top
Post Reply
21 posts