I'm taking it at face value the money is being spent appropriately.
Top

would the millions of pounds being spent on these cycleways be better used to fill all the pot holes sunken trenches and grates.to benefit all road users and the 99.9% of cyclists who dont use these routes?
Top

This sign caught my eye today (May 26 2016). It is at the Kirkgate/New Market Street junction and is presumably to do with the cycle highway that is being built. Despite passing the site fairly often I have never noticed the sign before but I have now found that it is seen on the current Google Street View (dated 2016) so it may have been up some time, but I thought I would still mention it. The first photo shows the sign and its location and the second photo is a close-up of the sign.

It was not until I downloaded the second photo that I saw the "Has No Scrap Value" wording on the back of the other sign (on its front it states the same directions). I assume the wording does not refer to the cycle highway 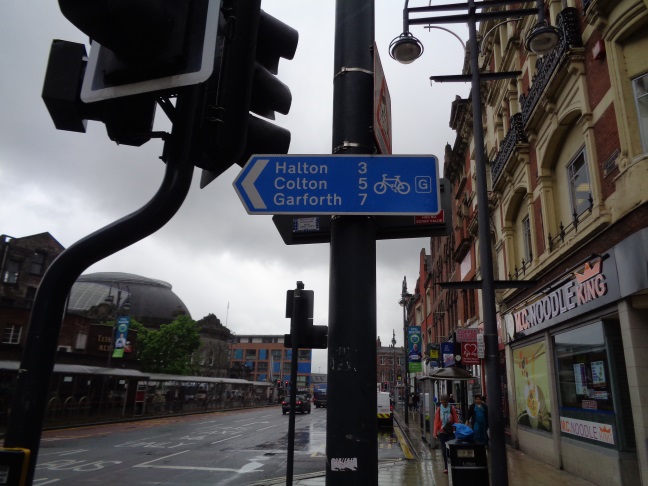 driving on elland by pass there is a cyclist on the road despite a dedicated cycle lane built at great expense?????
Top

Not as perverse as the cyclists I regularly encounter riding on the footway (illegally) where there is a new cycle track available.
Top

never under estimate the stupidity of some people!
Top

I think the Cycle Superhighway was a total complete waste of money and caused massive hold ups to everyone during the building. Only very rarely have I seen a cyclist actually using it and many still use the road or footpath. It would have been much cheaper to have given every cyclist in Leeds a free bus pass.
Top

..and the bit they recently completed outside ASDA York Road is now being dug completely back up again, to lay pipes - you really couldn't make it up. I have though, yet to see any cyclist actually using any of it so probably no great inconvenience.
Top

The 'Bradford Southern entrance' part of this cycleway sign on Water Lane being so near to the 'Leeds Station Southern Entrance' amused me when I spotted it on December 19 2017. I did not follow the direction indicated but I assume it will lead to the path by the Leeds & Liverpool Canal that is near by. These are 2 photos that I took of the sign. A rainbow is a ribbon that Nature puts on when she washes her hair.
Top
Post Reply
20 posts