You must have been having a good old forage in the undergrowth mate.. It's always best in winter for that.. By the way if the station was there Simon it would have been on the Bradford-Wakefield/London route. No trains came into Leeds using that part of Wortley curve. It was a direct access to Bradford. Thats why they closed it in 1985 to save money having direct Bradford-London trains not running to profit. The reason the tracks are still in place is because B.R didn't go through the correct channels laid down by the government when closing down lines & there were several court cases against them from (I think Bradford trade & commerce) amongst others who argued that loosing the direct link with London would be a financial disaster for Bradford.
A fool spends his entire life digging a hole for himself.A wise man knows when it's time to stop!(phill.d 2010)http://flickr.com/photos/phill_dvsn/
Top

Now he tells me!!!! Bleeding covered in greenfly I was... Found bugger all but sh!t loads of druggies needles!! Still, there is summat there, saw it back in late 70's. Long time undisturbed though!
I WANT TO BE IN THE "INCROWD"

No Simon, definitely not a station. What you were looking at were the remains of the Copley Hill gas house, where gas for coach-lighting was produced.If you look at the enlarged 1909 map, attached, you can see the sidings serving it and a gas-holder. Although the gas house had long gone by then, even in the early 1960s the siding between the gas house and the curve was still called the gas siding and that on the other side of the gas house was called the gas-tar siding, where the resultant tar would be sent away.Plus the fact that these remains are too far away from your Copley Hill steps to have any immediate connection with them in station terms.Sorry, there was never a station there.John. Cheers John. As a kid I assumed that it was a station. However, after poking around there t'other day I realised the area was far to small and out of the main run to be a stn! Phil_D did try to tell me, but would I listen??
I WANT TO BE IN THE "INCROWD"

It's how we learn Simon by mistakes... It's good you take an interest. Do yourself a favour & get them books out of the library!! very informative!!
A fool spends his entire life digging a hole for himself.A wise man knows when it's time to stop!(phill.d 2010)http://flickr.com/photos/phill_dvsn/
Top

Will do mate. I'm genuinely mesmerized at the history of this city that people are just not aware of! Majority of the people in Leeds must drive through area's that have long lost their historical significance and will never know. Wife thought I'd gone mad when I asked for the "Illustrated history of Leeds" a few years ago. I found it an amazing read, learning so much about all that I took for granted!! Must admit, people do get pi**ed off with me explaining cartain things all the time
I WANT TO BE IN THE "INCROWD"

It's good to know Simon. I'd rather be having a good old walk in the fresh air early Saturday morning than be watching some crap on the telly!! Get out & about to explore your city folks!!
A fool spends his entire life digging a hole for himself.A wise man knows when it's time to stop!(phill.d 2010)http://flickr.com/photos/phill_dvsn/
Top

Not far from here (The bridge over Amberley Road, between Netto and Tong Rd), does anyone know if the two buildings circled in the above picture are railway related? I always assumed these were part of a station, but I've never spotted one on old maps. 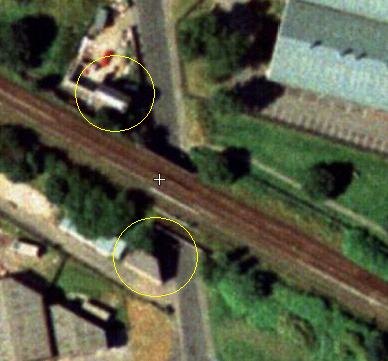 Not sure JF, the bottom one (closest to Oldfield Lane) certainly looks like a railway type building but the one at the top (closest to Tong Road) was up until a few years ago a derelict house. Now it has been refurbished and someone is living there although the noise must be horrendous. i'm sure someone (Phil!!) will correct me if i'm wrong but i don't think there was a station here.
Top

The House that has been redeveloped into a real big decent house is / was one of those railwaymans houses of times gone by. there was a similar one down Copley hill years ago, before it became unsafe and pulled down. I think the buildings on the South side of the bridge were old sidings buildings. There all still there and lead up to a yard full of similar buildings..
I WANT TO BE IN THE "INCROWD"

"Those who sacrifice Liberty for security deserve neither!!"
Top
Post Reply
180 posts