Don't know if that building is part of the station but the curving road in the bottom right is the steep climb that dogduke mentioned on page 1.
Top

Sorry Chris w but there is something wrong here.I know it's40 years or so but the area circled is on the up line to Leeds,the only building there was a not very large waiting room.If you look directly across the tracks the old goods warehouse runs parallel to the lines,allth e main buildings/station house were on the down side.I've looked carefully at the photo and to be honest I don't recognise it in its current state if at all,if it is on the up side then it's probably wrong.will satisfy myself and have a good look round next week
Consciousness: That annoying time between naps.90% of being smart is knowing what you're dumb at.
Top

Try these for size. and as it is now Weird thing is, the building circled in red doesn't appear on either map even though it's obviously old.
Top

Stanningley railway station was at the bottom of Richardshaw Lane immediately after the railway viaduct, on the Leeds side. To get to it you either walked up a cobbled road from Richardshaw Lane (part of it is still there) or there was a subway from Town Street. It was bricked up and you can still see where it was . . .Stanningley (for Farsley) station had a bay platform and trains from there to Pudsey Greenside started in 1878. When the Pudsey loop from Bramley was opened in 1893 no junction was ever created where it met the existing single line from Stanningley - it was disconnected at the Pudsey end and then used as a siding. So, at no point did any train go from Bradford to Greenside via Stanningley!I have lots of photographs and information about the station and I have written an article about it which is pending with "Steam World" magazine. My information comes from using the station in the late 1950s and early 1960s, plus my Grandfather who was booking clerk at Stanningley between the two wars and after WW2 . . .
David Gowing
Top

Great maps from ADS(as Usual)the old map enlargeg backs up my memory.Slaters Road did not exist in my days there,the map also confirms the location of the subway.Has IKB01 anything he can post and also let us know when the Steam world will run his article?
Consciousness: That annoying time between naps.90% of being smart is knowing what you're dumb at.
Top

You never know with Steam World - it could be several months! However, my last two published articles were published within a couple of months of posting.If you want a copy of the Stanningley and the Pudsey Loop article please give me an email address and I can send you the article as an attachment (free). Here is a photograph taken at Stanningley in 1954 showing my Grandad (booking clerk) and the Station Master. 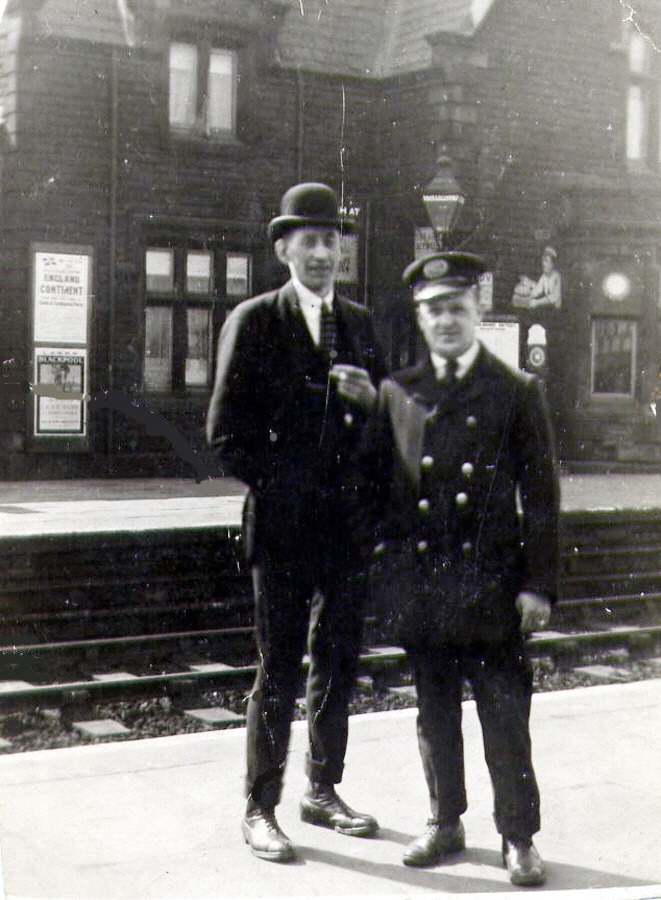 Cardiarms wrote: Weird thing is, the building circled in red doesn't appear on either map even though it's obviously old. The building in red is actually the rather small building shown in the approx location on the maps, it's just that it has been extended twice in 95 & 2000 and is now an awful lot bigger than it used to be. The building is also a too low a level to be part of the station, and the attached map from 1891 clearly shows the station layout & buildings Aaaahhhh!I think that the building, centre bottom of this map, is still there.
Top
Post Reply
69 posts