Page 4 of 4
by Leodian
In the first message in this thread big s on August 14 2007 gave a photo of a VR post box at the Leeds General Infirmary. Passing the area today (March 16 2012) I spotted that post box and took the photo that is with this message. The post box still looks just the same as the older photo. I thought it may still though be of interest, if for no other reason that the VR box is still there and still not in use!
by Si
While in Cockersdale yesterday, Jim and I found this Victorian post box. However, it is set in a modern wall, though using actual original Victorian cross-head screws. I think it's being used as someone's letter box.

by Leodian
This V. R. letter box is still in use at the Harewood Business Park, Harewood Yard, Leeds. I don't know if the letter box is still at the same spot it was originally sited but it could be there or thereabouts. I took these photos during a stroll in a public access area of Harewood Estate on September 1 2017. 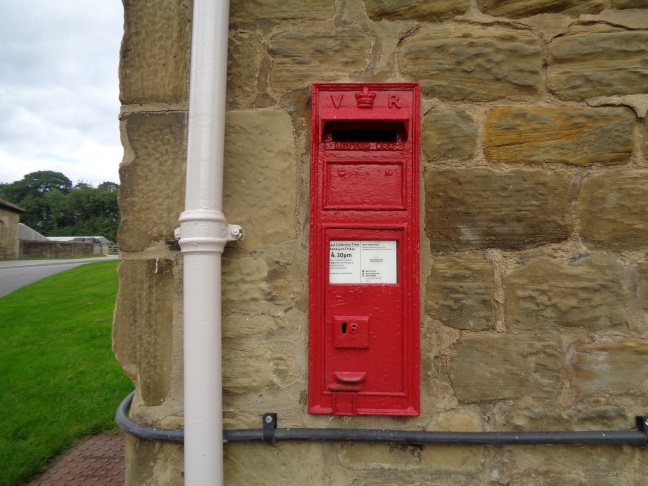 by tilly
There seems to be quite a few V.R post boxes around Leeds i dont know if this has been on without going through the threads.Out side the old entrance to the LGI there is one.

tilly wrote:There seems to be quite a few V.R post boxes around Leeds i dont know if this has been on without going through the threads.Out side the old entrance to the LGI there is one.

There are currently posts about the V. R. box at the LGI on page 1 and 4.

by tilly
Many thanks for that Leodlan i will go have a look.I should have seen the photograph on this page and looked at the post, old age and all that.

by mark1978
Definitely not the oldest, but there is a GR post box on High Ash Drive, LS17. The strange thing about that is that the street (and indeed the entire estate) didn't exist until 1965! Presuming it wasn't just sticking up in the middle of a field before then, I guess it must just have been an old one that they had in storage.
All times are UTC+01:00
Page 4 of 4