St John's place is a terrace of 3 or 4 stone built houses, IIRC it's on the corner of Station Parade and Kirkstall lane, the end house on Kirkstall lane is chopped at a funny angle and has 'St John's place' (I think) carved on a stone at first floor level.
Top

Here's the bottom end of the terrace Its an interesting comparison of where the brothers Joshua and Stephen lived. Stephen in Croft House, and Joshua in St John's Place. Another brother John Whitham lived in Willow Street. I wonder if Stephen popped round for tea on a Sunday afternoon? Its gratifying that so many of these properties still exist. A few years ago I found a property in Thirsk only for it to be demolished shortly afterwards. Still at least I found it and posed in the same position as a Great great grandfather had in 1877 when the photo I have of the house was taken. Hirst Mill at Shipley is still there as is a mill in Westgate, Baildon (albeit now a trendy wine bar!)
Graham Whitham
Top

GeeWhitham wrote: Its an interesting comparison of where the brothers Joshua and Stephen lived. Stephen in Croft House, and Joshua in St John's Place. Another brother John Whitham lived in Willow Street. I wonder if Stephen popped round for tea on a Sunday afternoon? I doubt it!Willow Street ran alongside Willow Road which effectively linked Croft House, Cardigan Place and the Perseverance Foundry together. It's the section of road that runs from the bottom of Cardigan Road to the lights on Kirkstall Road, parallel to the viaduct/embankment. (Incidentally, the Willow Brewery was here, also, where the car park behind the social club is now.)This is Willow Street, 1959, looking up from Kirkstall Road. The large building was a Conservative Club (perhaps Stephen was the only member!) at this time being used as a school clinic. Graham, there are several other pictures of this street on Leodis, so if you have John's house number, there's a good chance his home will be in one of the shots. This area now looks totally different. Hi, Graham,Here's your railway connection. I think St John's Place is the block highlighted green in the middle (from the 1906 OS map.) The station is still there.Also, notice how close it is to St Stephen's Church. The 1851 census only lists the schedule number which is 64. Whilst the 1861 census says no 8 Willow Street!!!!!By 1871 he had gravitated to no 11 and by 1881 he was dead but his wife Susannah had moved to 45 Burley Lawn together with son Robert (yet another b***** millwright) In 1891 Robert is living in Manns Row, Scarcroft (Wetherby). But is now living off own means. Its quite exciting isn't it. The Whithams all lived within striking distance of Perseverance Works. We are currently watching Little Dorrit on TV and I have a 1858 copy of Little Dorrit (in 2 volumes) bought from T Harrison & Son, 55 Briggate, Leeds. Formerly the property of Fanny Whitham of Wanstead House, Burley.
Graham Whitham
Top

Courtesy of Leodis, number 11 Willow Street (on the left.)Good, innit?!!! 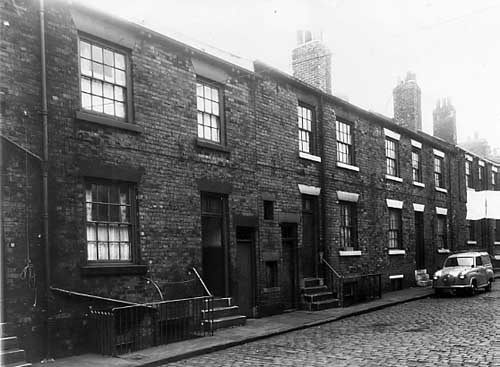 That's brilliant Do we have any car buffs who can ID the car? At first glance I thought it was an a35 van. John's entry on Ancestry.co will now have a picture of his house. Many thanks SI.
Graham Whitham
Top

GeeWhitham wrote: That's brilliant Do we have any car buffs who can ID the car? At first glance I thought it was an a35 van. John's entry on Ancestry.co will now have a picture of his house. Many thanks SI. My pleasure.Yes, it's an Austin A35 van.
Top

GeeWhitham wrote: Apparently a rail connection to the GNR was introduce in 1890 of which there may still be traces. I went for a walk today along the canal, maybe not the best weather to do it. There's an Environment agency sampling station so you can get down to the river. The abutment for the bridge on the south side of the river can still be seen, just, and the track bed can be followed with some difficulty all the way east to the inner ring road, although you can walk the tow path about 5m above the river and see its course. Will try to post pictures later. The abutment for the bridge will be clearly seen from the North side of the river but it's all private. Strangely there's nothing obvious of the bridge on the north side that I could see.
Top
Post Reply
105 posts