I have found a flat at Croft House for sale. I am currently going through some copies of legal documents I got from Leeds Archives a number of years ago and may be able to find the purchase price for Croft House. A Leeds solicitors, North's gave its old records to the archive presumably whilst having a spring clean!Stephen Whitham had moved to Queen Parade Harrogate by the time of the 1861 census and gave as his occupation retired iron master. In 1871 he is living at Stafford House, Harrogate. (Currently on offer at £2 million. In 1875 he died and is buried at the church of his namesake St Stephen's Kirkstall. He is buried together with his first two wives and next to the grave of his two young daughters Elizabeth and Mary whose headstone carries this rather poignant poem. They are no more! Oh dull and drearSound those bereaving mournful words;Affliction finds no wilder tear,Memory no darker doom records;Not in our homes, not by our side,More the bright beings we deplore;The hearts which love had sanctified,They are no more!I have attempted to reproduce the punctuation too!
Graham Whitham
Top

tyke bhoy wrote: Si wrote: After being founded by Stephen Witham (of Croft House, Burley) in 1851, it was taken over by James Kitson in 1854. His son, also James, later took over, and later in life became Baron Airedale and Leeds' first Lord Mayor. Coincidentally James Kitson Bart (the son) is part of the subject of Drapsey's most recent what/where conundrum on the "signs of old Leodis" thread Sir James Kitson and his son Roland in 1905, outside Gledhow Hall. Just read this thread and noticed the ref to the Cardigan being the meeting ground for the concept of Leeds united. SimonG beat me to it, but the Salem halls is where LUAFC was born!
I WANT TO BE IN THE "INCROWD" Hi Si, that's more than probable. Stephen and Joseph had 2 brothers Joshua and John who each set up business as well as Stephen's son Samuel. To recap. John Witham 1773-1823 was I believe the founder of the Perseverance Iron foundry. John Witham a millwright of Kirkstall is listed in Baines Directory of Leeds for 1817. He passed on business to Stephen and Joseph and in his will dated 1822 asks them to give the other sons apprenticeships etc. Parson's directory of Leeds 1826 lists Stephen and Joseph Whitham of Kirkstall as millwrights, machine makers, brass and iron founders.1 May 1851 Partnership between Stephen & Joseph Whitham dissolved. Firm becomes Joseph Whitham & Son. (Son being John Whitham, my 2 * great grandfather) 23 September 1852 John dies. Possible that younger sons, James or Joseph step in.15 March 1854. Joseph dies. Picture becomes cloudy now. Foundry possibly co run by Joseph (younger) and brother James. 1881 census lists James Whitham (living in Ethel House) and describing himself as Engineer and Iron Master employing 600 men. Later there was a big probate case which ended up with the order to sell the Perseverance iron foundry. I have the details but find the legal language hard going! Maybe the newspapers of the period might help. There is much more to be gleaned. BTW Is St John's place still there?
Graham Whitham
Top

I don't know it myself, but St John's Place shows on Autoroute as being off the north side of Kirkstall Lane. On Google Earth, it's called Sayer's Close, though.According to Leodis, there was a St John's Place in the city centre, and also one in Holbeck.Which do you mean?
Top

This is St John's Place in Holbeck. Coincidentally, the building far left, is a maltster's belonging to the Willow Brewery, which was just over the viaduct/embankment from Cardigan Place, Kirkstall Road. The attachment page is playing silly-buggers again - will try later.
Top

This is the St John's Place in town. It ran between Wade Lane and New Briggate. The much-altered building was originally the 17th century parsonage for St John's church, according to Leodis. And this is Holbeck's St John's Place. Note the Willow Brewery malting house, extreme left, as mentioned above. 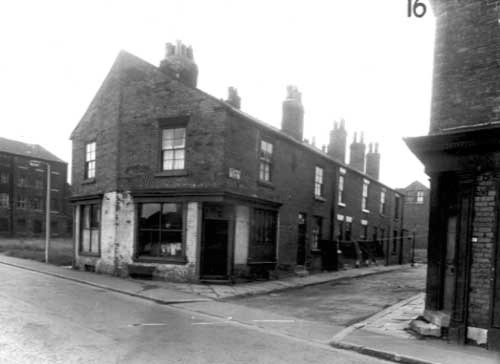 The address I was referring to was St John's Place, Kirkstall. This is where Joshua Whitham and his family lived. Census for 1851-1881 shows first him, his wife and son John. In 1851 He describes himself as Master Millwright employing 2 boys! When his brothers were employing 270 men! In 1881 his widow, son John and his children are still in St John's Place. And in 1891 he's there still! There appears to be a bit of a railway influence around there, so it may be near a station. I shall have to check the 1901 census shortly.If you have any interesting photos, you could mail them to me direct if that's not against the rules here! I am grateful to you and to everyone else here who has taken an interest. I'd particularly like to get a really good scan of that picture of the Perseverance works to frame! My email is [email protected] is a family connection to Dawson's brewery. Joseph's daughter Anne married John Dawson. I am in contact with at least 3 of their 2 * great grandchildren. One in New Zealand, another in Australia and one who didn't escape in the UK. Apparently some of the brewery equipment was made by Perseverance works. All the best Graham
Graham Whitham
Top
Post Reply
105 posts