Help please. Is this or not an old boundary stone on Adel Moor.

Unusual markings, logos and symbols around the city
Post Reply
5 posts • Page 1 of 1

Help please. Is this or not an old boundary stone on Adel Moor.

During a walk on part of Adel Moor on January 11 2017 I went to the Buck Stone rock and then meandered around to the wooded area fairly near by. I don't know exactly where I got to but I soon came onto a track. Standing by that track there was a stone pillar that did not look natural and there seemed to be no other stones nearby. Being curious I've now looked at maps in the Old Maps UK website and found that a BS (meaning Boundary Stone from the OS website) was marked at possibly where or thereabouts the pillar is. The BS is marked on maps from 1893 to 1934 but not from 1954 nor after. It is though also marked at a FW (Face of Wall) but there seemed to be no sign of any remains of a wall where the pillar is. Continuing to walk down the track going 'upstream' I fairly soon came to the Seven Arches, so that may help in the location of the pillar.

I would be grateful if anyone has any information about the pillar, such as is it known to be an old BS that may or may not have been moved. It may of course simply be a stone that has been put there but having no purpose. I have added 2 of the photos that I took on January 11 2017. Note how straight the back of the pillar is, suggesting it might have been cut to that shape. 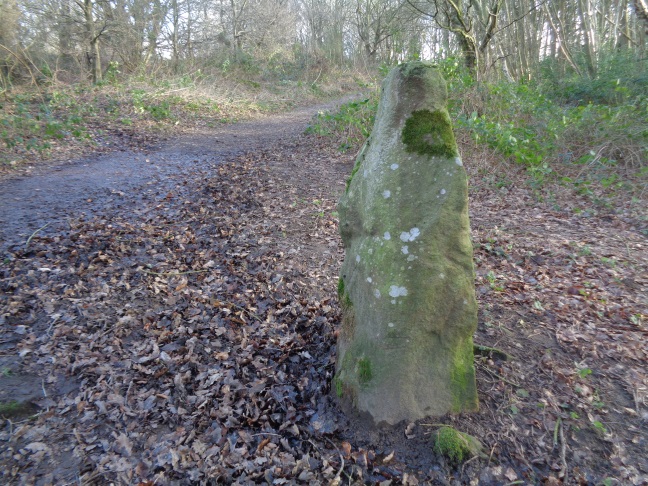 The boundary is a Parliamentary County Division Boundary, as shown on the OS Yorkshire 203 map
published in 1851. It has FW along its route which suggests there was a wall and the boundary stone (ByS) was part of that wall.
Further along towards the stream the boundary is annotated 4ft 6 RH which means the actual boundary is that distance from the root of the hedge. There were several boundary stones to the east, along Nursery Lane.
Top

Are we talking North Riding West Riding boundary? Given the rural location Im surprised at the need to be as precise as to the nearest half foot mid 19th century.
living a stones throw from the Leeds MDC border at Lofthousehttp://tykebhoy.wordpress.com/
Top

If a wall is 2ft thick and a mile long the base covers a quarter of an acre, which could be worth £100,000. If the wall is on your side of the boundary, you are responsible for its upkeep, so it is important to know exactly where the boundary is.
Several years ago I was commissioned to survey a recently built motorway to settle a dispute.
The width required for a motorway varies according to the contours of the land; where there is a cutting the motorway area is wider etc. However when the motorway was completed there was fenced off strips of land either side which were not used, clearly the government had taken more than was required. The landowners had been cheated because when land is compulsory purchased by the government, they pay less than the going rate, but they are only allowed to take the land that is required. The amount of land illegally taken varied from a few inches wide to several feet wide.
It might seem trivial but over the 4.5 mile motorway that I surveyed, the area had a value of hundreds of thousands of pounds. The landowners were repaid at the true value of the land, not the compulsory purchase value of the land which they were originally given.
Top

Thanks WR and tyke bhoy for your inputs

If the pillar is the old boundary stone (BS) then it would seem that the wall it was at has been removed at some stage such that there is now no readily seen remains of the wall's stones by the pillar.

Having just looked at the excellent National Libraries of Scotland's Ordnance Survey map section http://maps.nls.uk/os/6inch-england-and-wales/ I've noticed that what may be the BS is marked on the 'Yorkshire 203 (includes: Leeds.) Surveyed: 1847 Published: 1851' map so I wonder just how old the pillar is (assuming that it was/is that boundary stone)?
A rainbow is a ribbon that Nature puts on when she washes her hair.
Top
Post Reply
5 posts • Page 1 of 1