Having recently noticed that a Bench Mark (BM) was marked on a 1953/54 1:1250 map at the junction of Infirmary Street and City Square on the then GPO building I decided to see if the BM was still there (it is not marked on a same scale 1961/69 map nor a 1964/70 map I saw). The BM is still there but I nearly did not see it as it is worn and a bit damaged looking. I would never have randomly spotted it without knowing it might be there. I took these photos on June 28 2017. The first is a close-up of the BM and the second shows its location at the corner of the old GPO building. 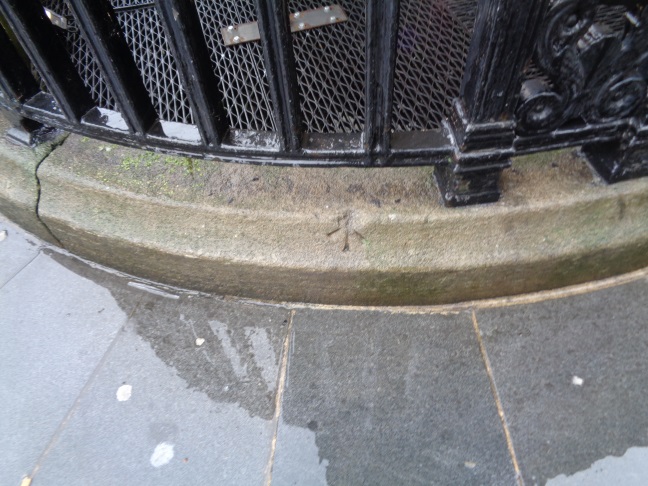 It's marked on the 1910 map, also one across the road at Mill Hill. The one in the bottom left corner will have been demolished to make way for the new Queens Hotel. Thanks buffaloskinnner for the information and map

For anyone interested in regard to the "one across the road at Mill Hill" that now lost BM is shown in the photo posted by hyperioncantlogin on Wed 17 Feb, 2016 11:51 with replies by liits and Brunel.

The 1910 map provided by buffaloskinner reminds me of the many intercrossing tram tracks in the centre of Leeds. I wonder how often trams ran into one another?

As to the trams in that area I do recall them running along Boar Lane/Duncan Street and Wellington Street but my recollection of them on Infirmary Street and Park Row is now very dim to almost non-existent! It's a good thing that others do recall them and also that there are maps and photos.
A rainbow is a ribbon that Nature puts on when she washes her hair.
Top This old Bench Mark (BM) does not seem to be noted in this thread. It is near Stub House near the 'Emmerdale Village' set used by ITV Yorkshire television service in Harewood Estate, Leeds. I took the photos during a stroll in a public access area of Harewood Estate on September 1 2017. I've found that the BM is recorded there in at least 1893. I've also now found that it is noted in the Bench Mark database website where it was last logged as seen on September 3 2014, but I thought it is still worth mentioning in this thread. Remains of a much eroded bench mark on the North facing wall of the Roundhay Fox pub.

That's a very well spotted one being so eroded.
A rainbow is a ribbon that Nature puts on when she washes her hair.
Top

I spotted this nice Bench Mark (BM) on September 21 2017. It is on the small road/foot bridge that crosses the Leeds & Liverpool Canal on Wharf Approach for access to and from the Dark Arches under Leeds Station. On looking at old maps I found that a BM is marked there on an at least 1891 map but as the BM does not looked particularly weathered it might not be the original BM.