Unless you already knew it was there (which I did having come across it a few years back) this Bench Mark (BM) may remain unknown as it does not seem to be marked on maps. It is located close to getting into Golden Acre Park when coming along Bartles Lane from Arthington Road. I suspect that the pillar it is on is not where that pillar was originally. I took these 2 photos on March 13 2017. The first shows the well hidden location and the second shows a close-up of the BM when moving plants out of the way. 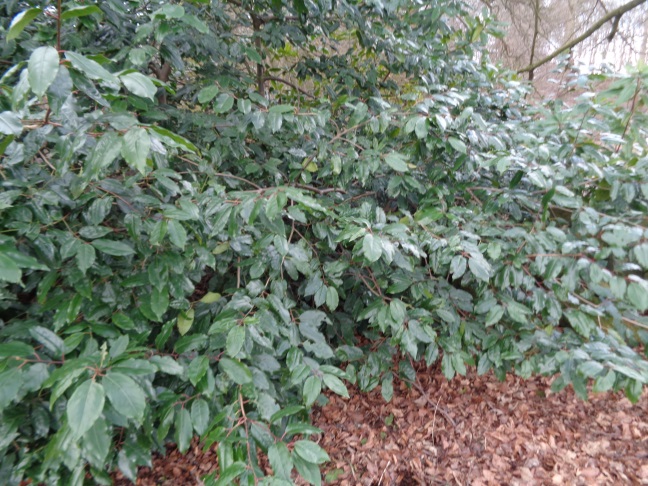 by Leodian
An easier (just!) to spot Bench Mark.

This Bench Mark (BM) is somewhat hidden by plant growth but the pillar it is on is not. The BM is noted on an at least 1893 map and is located just in Golden Acre Park on the left when entering from Bartles Lane (coming from Arthington Road). I took these 2 photos on March 13 2017. The first shows the pillar which has the BM but that is hidden on the pillar's left side. The second is a close-up of the BM when moving some of the plants out of the way. by warringtonrhino
Leodian,You actually mentioned it on 28 August 2012. The benchmark details are shown on the 1851 OS map at the extreme lower left corner of sheet 188, it appears to be on a left hand gatepost of a track going north from Bartles Lane.

warringtonrhino wrote:Leodian,You actually mentioned it on 28 August 2012. The benchmark details are shown on the 1851 OS map at the extreme lower left corner of sheet 188, it appears to be on a left hand gatepost of a track going north from Bartles Lane.

I'm unsure which BM you are referring to but as I have stated that the one just inside Golden Acre Park (GAP) is noted on at least an 1893 map but that the currently very well hidden BM at the side of Bartles Lane does not seem to be noted on maps then I assume you are referring to the latter BM. I've now found sheet 188 in the excellent National Library of Scotland website and as you note a BM is marked at the extreme lower left corner. I do think though that is the BM that is just in GAP and not that by the Bartles Lane track, though I accept that I may be wrong. For anyone interested this is the link to the 1851 OS sheet 188 http://maps.nls.uk/view/102344866

by warringtonrhino
Leodian I have drawn the outline of the modern golden acre park on the 1890's OS map
Please can you describe, with reference to OS map features, the location of your photographed benchmark.

. It's an interesting 'puzzle'.

Unfortunately I don't use the GPS function on the simple compact camera that I use so I cannot give the precise location of both of the 2 BMs. Using the 1851 OS map the arrow for the location of the B.M. 414.5 (414½ feet above sea level?) does seem however to be where the BM is now on the pillar just inside Golden Acre Park (GAP) when immediately entering GAP from Bartles Lane. The BM that I think is not marked on maps would seem to be between the 'W' in the 'F.W.' and the 'B' in 'Bartles Lane'. I would even say that it may be where a diagonally marked 'F.W.' meets Bartles Lane. Perhaps that pillar with the BM is where that old footway (what I assume F.W. stands for) met Bartles Lane. Sorry therefore that I cannot be more precise as to exactly where the BM by the Bartles Lane track is. As Sherlock Holmes would say, solving this puzzle may take a 2 pipe job

Edit shortly after posting. I now think that F.W. is not footway as there are many FWs marked on the 1851 map that do not look like a footway would be there, so I now think F.W. may mean Fixed Wall or at least something to do with a wall.

by Bruno
Leodian
FW means Face Of Wall, apparently. What that means is anybody's guess.
The abbreviations on O.S. maps are all on the link below.

by jma
According to this FW = Face of Wall which would make sense.

Anyway, footway is a modern term for roadside pavements, differentiating them from footpaths which are public rights of way on foot across land

Bruno beat me to it.

by warringtonrhino
I suspect this post will be too late, but here goes

FW is the abbreviation for face of wall, it refers to the exact location of a boundary. On a map the letters are always on the boundary side of the wall, the boundary is the dot dash line. The two circles shown each side of Bartles Lane are boundary stone symbols.
The one on the north side of the lane may have had an unofficial benchmark used to help the quarry manager. It is only 61 metres from the 414.5 BM which is unusualy close on a comparatively level terrain. I will investigate next time I am in the area.

Thanks also warringtonrhino for your help and the time and effort you will have put in to provide that help, which is appreciated

.
Your "The two circles shown each side of Bartles Lane are boundary stone symbols" is interesting as the pillar with the BM and an extremely close unmarked pillar might be those stones.

If you go to Golden Acre Park a visit to the Adel Dam Nature Reserve could be very good. When I was at the first hide there on March 13 2017 there was an amazing range of bird types around (there had been food placed for them) that included mandarin ducks, mallards, various small birds such as tits, finches and a robin, a large pheasant, a woodpecker all seemingly not bothered by the presence of other species, and not including squirrels with them all and a heron that was further away. It would have been different I guess if a bird of prey or a land-based predator appeared.
All times are UTC+01:00
Page 14 of 20