by buffaloskinner
Below is the right hand protrusion on the map, the other two on the left have been removed and have been replaced by a shop. There does not seem to be any remains of any stones and I would make the logical assumption that they would be placed there for mounting horses, especially for the cliental of the City Varieties.

PS. There is a similar looking set of stone steps near the lock at the end of the Leeds & Liverpool Canal (or the first if going to Liverpool!) where that joins the River Aire.

by Leodian
Having noticed some Bench Marks on old maps I went to their area yesterday (July 19 2016) to see if they are still there. The first photo is a close-up of a Bench Mark (BM) on a wall (over Sheepscar Beck) on Benson Street near to its junction with Sheepscar Street South and the second shows the location of the BM looking across Benson Street with Sheepscar Street South on the left. This BM may be that which is marked on maps going back to at least 1891. 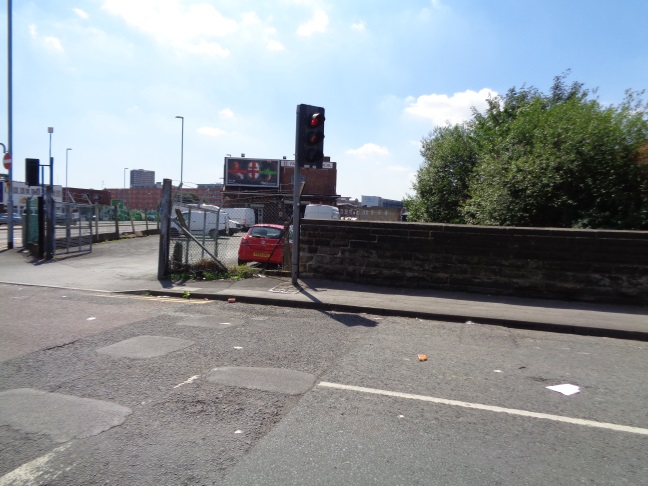 A BM is marked on maps from at least 1910 on the North Street front of the nearby Eagle Tavern (that is currently undergoing renovation) but if there is a BM there I did not spot it.

My next 2 posts to this thread will be about 2 unrecorded (?) BMs that I spotted by chance by or near the Lovell Park area on North Street.

by Leodian
This is one of the two unexpected Bench Marks that I found on July 19 2016 and mention in my previous post. This Bench Mark (BM) is not complete as the horizontal line that usually runs across the top of a BM arrow is missing. The first photo is a close-up of the BM and the second shows its location by Lovell Park on North Street. I have not seen any record of a BM at that location so if it is unrecorded I wonder if the large stone with the arrow may have once been elsewhere? 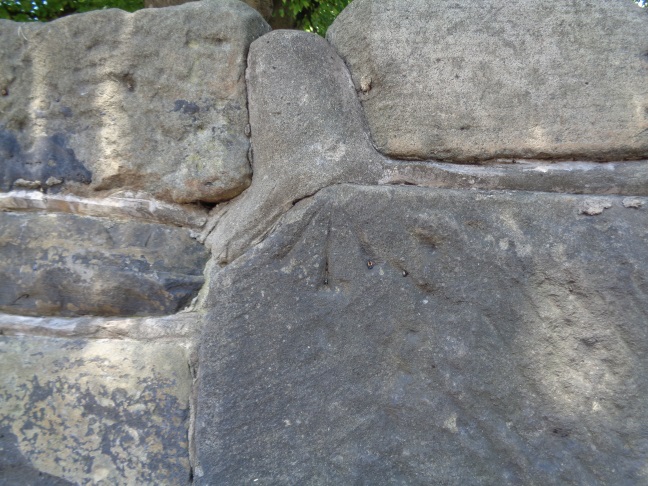 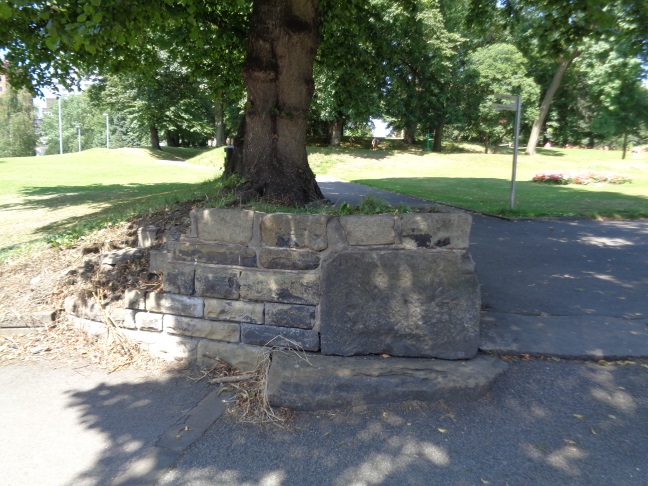 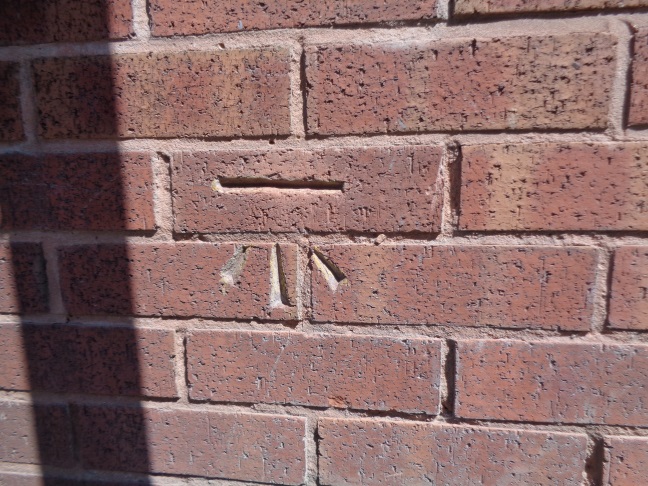 by Leodian
This is a very eroded Bench Mark (BM) on the Leeds side of the Woodhall Bridge (footbridge) over the River Wharf not that far from East Keswick. I have a walk in the area a couple or so times a year but the thought that there may be BM there had never crossed my mind until I happened to see one marked on a 1963 map, so I had a look during a walk on July 25 2016. Having had a good look around I was just about to give up looking when I surprisingly spotted it (I'm fairly sure it is the BM). The bad erosion may imply that the BM is old but the oldest mention I have been able to readily find is on a 1963 map, but I suspect it may be older. The first photo is a close-up of the BM and the second shows its location in the stones on the left at the start of the footbridge. by Brunel
Marked as SMITHY on the 6" map:
http://maps.nls.uk/geo/explore/sidebysi ... ht=BingHyb

by Leodian
These are two photos that I took on December 13 2016 of a moss-covered Bench Mark (BM) on the Kirkgate wall of Leeds Minster. I've known from old maps that there might be a BM around there but I've never spotted it before, but I finally did on December 13 2016 being a bit further from Church Row than a photo in the BM database website indicated it would be. This is the link to the BM database website:- http://www.bench-marks.org.uk/

The first photo is a close-up of the BM. The second shows its location on the wall a little in from the left (above and left of the first dead leaf from the left) in a view looking along Kirkgate with Church Row across the top in front of the Lamb & Flag bar. 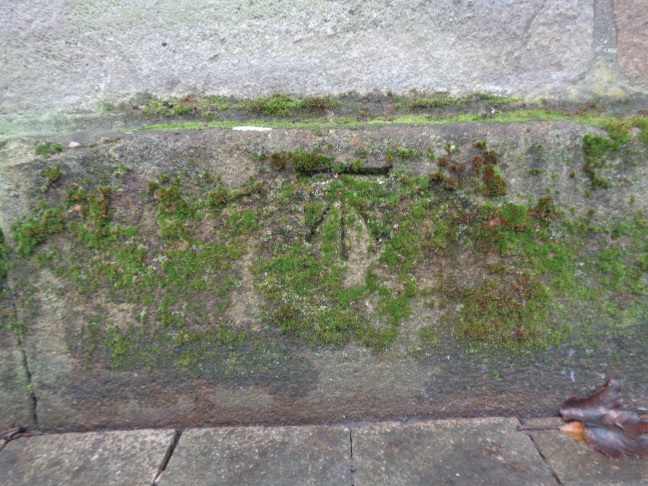 by Leodian
This is an eroded cut Bench Mark (BM) on the old Church Institute building (now Albion Court) on Albion Place, Leeds. Having noticed on an 1891 map that there was a BM there at least then I had a look on Jan 26 2017. Being so worn I almost missed spotting the BM just above pavement level. If I had not known it might be there I would never have noticed it just randomly looking around. 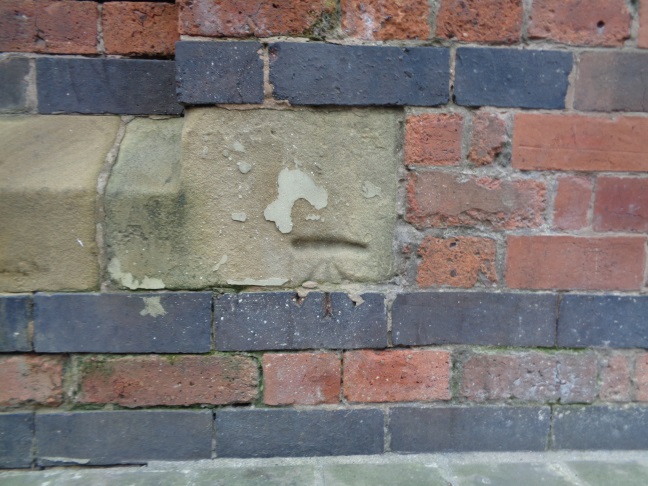 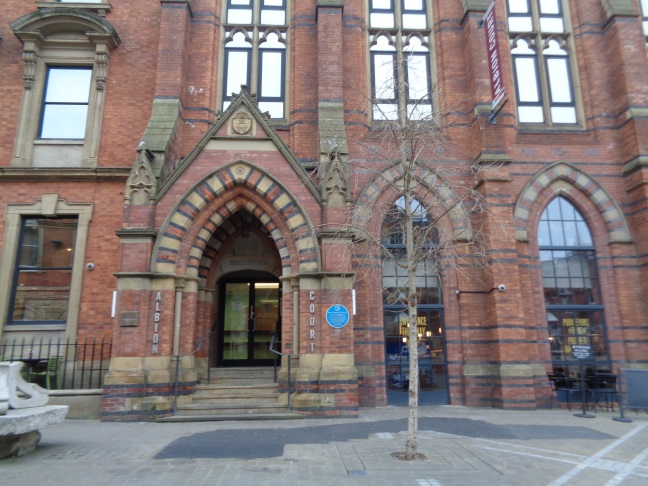