I spotted this benchmark (BM) on January 7 2020 on a building at 14-16 Swinegate, next to Blayd's Yard (on the left in photo 2). I had known there might be a BM there but had never seen it before so it was a surprise that I did as I was only casually looking. The BM is however very obvious so I don't know why I missed it before! I've found there was a BM there on an at least 1891 map so I wonder if it is the original or recarved at some stage. The first photo is a close-up of the BM and the second shows its location on the central stone column of 14-16 Swinegate (currently a building to let that was itself a letting agent!). 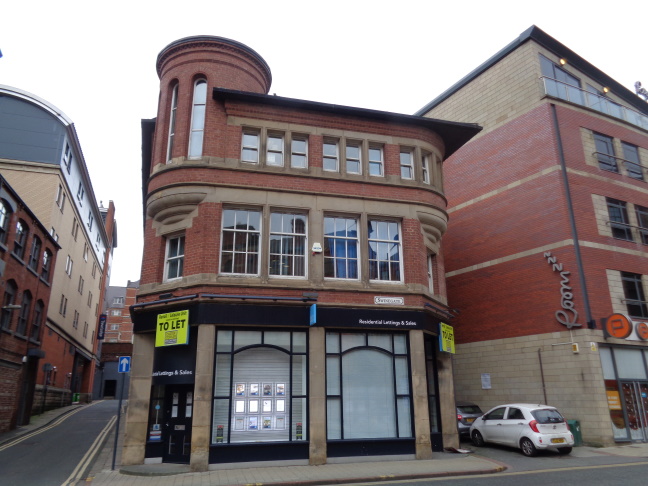 I think you are right it looks like it has been re cut the wear on the rest of the stonework is not has clear.
No matter were i end my days im an Hunslet lad with Hunslet ways.
Top

Having seen on old maps that there might be a Bench Mark (BM) on Leeds Bridge I had a look on June 15 2021. I did spot the BM but except for its horizontal line it is badly eroded. I have attached a close-up of the BM and a photo showing its location a bit above pavement level below the ornate lamp post. A BM is there in at least 1891 but it may or may not be the original. It may have suffered some more erosion during the recent extensive work on Leeds Bridge. I've now found this BM in the UK Bench Mark Database where it was last logged on July 8 2020 and stated "Condition: Good" but a photo of it taken on September 2 2013 is very similar but the BM is a bit less eroded. When I was in the Tower Works area on June 14 2022 by chance I noticed a Bench Mark (BM) on the Globe Road front. The first photo shows a close-up of the BM and the second shows its location (a little above and left of the dark strip on the pavement).
PS. Since I was last in the immediate area a few years back there has been and continues to be major construction work! A rainbow is a ribbon that Nature puts on when she washes her hair.
Top
Post Reply
194 posts