Does anyone have any information on Wyther House which was located opposite the bottom end of Armley Ridge Road? Leodis states this originally belonged to the Gott family but was handed to the state for use as an infant's hospital around the time of World War 1. Leodis doesn't have a picture of the actual building and I've found nothing else on the web, I'm curious as the the scale and style of this building, and when it was demolished. The houses on its site are quite modern, which suggests it may have been demolished quite recently (or the site was vacant or in other use after demolition if this was earlier).Gotts house nearby still stands and is quite well known, but even that has lost a wing or two.
Top

Reginal Perrin wrote: Wow. Where was that? Lower Aire Valley where Knostrop sewage farm is? There was a big stately place in Swillington too, demolished in 1950. http://www.leodis.net/display.aspx?reso ... SPLAY=FULL it was on the other side,where windy ridge riding school was??
i do believe,induced by potent circumstances,that thou art' mine enemy?
Top

tyke bhoy wrote: Definitely needs a copy and paste as the vertical lines put kybosh on it however this should work <<<http://tinyurl.com/2j4egc>>> Nice one Tyke bhoy,how did you do that?Its also worth zooming out to get the bearings.I would scan on of these map reprints and attach on here but it has never ever worked for me yet.
Don't get me started!!My Flickr photos-http://www.flickr.com/photos/cnosni/Secret Leeds [email protected]
Top

CNOSNI there are other similar facilities available but not as memorable Basically if you have a long or otherwise troublesome URL if you go to http://www.tinyurl.com and put it in the field provided press a button and they give you a short "tinyurl" URL which redirects to your original. Its free of charge and though I haven't read the disclaimers I believe the link works in perpetuity (forever)
living a stones throw from the Leeds MDC border at Lofthousehttp://tykebhoy.wordpress.com/
Top

[quotenick="cnosni"] The Parksider wrote: cnosni wrote: saw a map in Leeds central library today,19th century.It shows Knostrop old hall and Knostrop new hall.Unfortunately there are no nearby landmarks to give you an accurate position of the two,which were virtually next to each other.The best indication i can give is midway between Skelton Grange cottages,on Sewage works road and Knostrop rifle range.This is where Knostrop Lane meets sewage works road. A couple of years back I traced the site of the old hall to the dead end of Long causeway.Just before that is a right turn down to the sewage works, but the few yards to the dead end a nd a large heap of rubble seemed to be the site of the old hall - done by matching my 1935 map of Leeds up which shows the hall with modern A-z's.I have a reprint of the book "The old kingdom of elemete" by Edmund Bogg. A must have for secret Leeders and peobably available to look at at your library.This was reprinted at the same time "The romance of old leeds" was re-printed which has some good old stuff in it - Red Hall in Leeds and Hunslet lane Theatre!!! First off,went to Leeds Library Local studies/family history room again today and bought an excellent series of reproduced maps of Leeds,form the 18th century til now,£14.99 and really well worth it for those interested.Any way i sat down and compared the maps from the 19th century til 1947 and i can pretty much say that my original location for Knostrop old hall is wrong,it looks like it was situated on what is now Cross Green Garth,in the Industrial estate..Hopefully this link to multimap will workhttp://www.multimap.com/maps/?#t=l&map=53.7835 ... 1.51173:18|| [/quoteIt works now at 11.23hrs. on 5 January 2008 . Very usefull .
roundhegian
Top

I'd tentatively concur with the area of Cross Green Garth-ish. Measuring on Godfrey 218.06 from St. Hildas, as an existing landmark, then transferring the measurement to google earth, puts Knowsthorp New Hall in the little dog leg on Knowsthorp Lane, exactly where it is on Godfrey.It's a little more hit and miss to measure from here to the Old Hall, but it puts it "in the region of".Lower ellipse New Hall, upper, Old Hall. Just my guess anyhow.There's an old looking redbrick building on Knowsthorp Lane. Very, very old Leeds looking, I think in the builders merchants. I wonder if that was around for the 1906 Godfrey map. 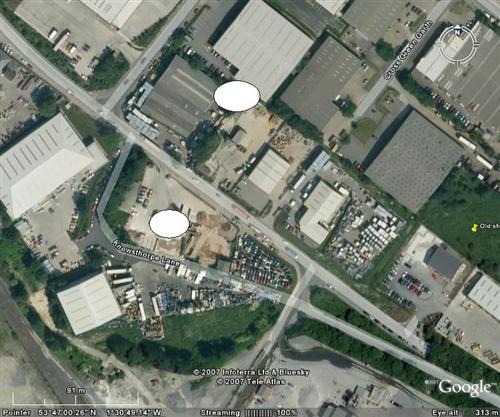 Inerestingly i can find nothing on Knostrop new hall on Leodis,there is however some pictures of Osmondthorpe Hall,of which i am going to TRY and attach to this message,as usual it will probably fail so look for the usual follow up message with a link.Any way im pretty sure that the wall immediately adjacent to the house on the left remains. Someone on Leodis has described the building as Georgian,but id say its older than that,look at those windows in the middle on the ground and first floor,perhaps the windows on the left of the building are newer repalcements or part of a later extension,but those in the middle seem to predate the stylle of the mid to late 18th century,what does any one think?
Don't get me started!!My Flickr photos-http://www.flickr.com/photos/cnosni/Secret Leeds [email protected]
Top

What am i doing wrong,i click the attachment button but when it comes to clicking browse nowt happens.Any way here is the linkhttp://www.leodis.net/display.aspx?resourceIde ... 0_47686404
Don't get me started!!My Flickr photos-http://www.flickr.com/photos/cnosni/Secret Leeds [email protected]
Top

You're right, Cnosni. Gotta be a lot older. I'd say late 16th century/early 17th, at a guess. Could be even older. Some old timber framed buildings were sometimes re-clad with stone at a later date.
Top

Si wrote: You're right, Cnosni. Gotta be a lot older. I'd say late 16th century/early 17th, at a guess. Could be even older. Some old timber framed buildings were sometimes re-clad with stone at a later date. Another comment on another picture of the hall says its 16th century,but as you say the possiblity of it being older,or just as likely to have been built on a previous structure is very real,after all the place name clearly indicates that the area was the "Farm/settlement of Osmond or even Oswin as that is how i have seen it described (Oswinthorp) in 16th century parish registers for Leeds.Yet another comment says that it burnt down in 1924,but considering the photos were taken in October 1931 then clearly the contributor has made a mistake.
Don't get me started!!My Flickr photos-http://www.flickr.com/photos/cnosni/Secret Leeds [email protected]
Top
Post Reply
86 posts