We really do have a panoramic view of Leeds from our back windows which face almost due North.

When we came here, it was the selling point for the house. I must have mentioned before that as well as the general view, we've witnessed some events such as the fire at Kirkgate Market, the fire at Moorhouse's on Old Lane, and New Year fireworks displays, especially 31 December 1999 which was truly spectacular.

We didn't witness the Tristar overrunning the runway at LBA, but we had a very clear view of it while it was stuck there.

As time passes, what was new becomes familiar. Also, when we moved here in 1975 the houses were quite new so there was little behind us but the Green Belt. The back gardens have grown over the years and one of the neighbours had a couple of Leylandii which must have reached 30-40 feet blocking a chunk of the view. A few weeks ago they had professionals in who removed them without a trace. That's down to our right so the bit that's newly revealed is Leeds 10/11 and so, for example, we can see Elland Road again.

Something else that's changed has been the level of light pollution. Not so long ago, Leeds at light was a blaze of yellow street lights. Now, it's so much more muted, especially when a lot of the lights go out after 0030. There are now loads more red lights on tall buildings and cranes.
Top 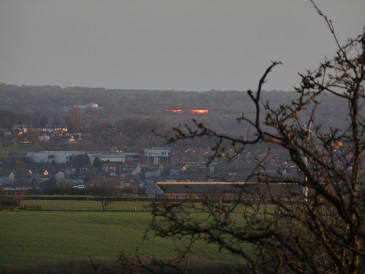 I've finally got my camera out and took this pic this morning (14 March.)

Not a particularly clear shot handheld with x18 zoom and I've reduced the file size a lot to get it to load but I think it gives an idea of the prominence of this in sunshine seen from several miles away across Leeds.
Top

As a bit of an update, when I first noticed this building I was concerned that I seemed to have been missing something so prominent. In fact, it's only prominent from our house when the sunlight is just right. That only seems to occur for a couple of hours after sunrise in Winter - if the sky is clear, of course. As the sun gets higher, there's no reflection in our direction. I've been awake several times at sunrise and just after in the last few weeks and there's no reflection; presumably in midsummer the sun rises too far to the north-east. Not a big deal in the scheme of things but it does explain why I'd missed something staring me in the face in the winter months.
Top

Have you tried looking just before sunset? Without getting a compass out the glass end faces southwest pretty much (so diagonally across the running track oval). The red sides are therefore northwest and southeast and I think you are pretty much looking north to see it. Back in February the sun will have been rising at approximately 45 degrees to the right hand side as viewed from Gildersome. Now I suspect pretty much 0 degrees. However the setting will be at 45 degrees to the left side albeit you would only be able to see the end you may see some glow. Clearly you are only really going to see some reflection/ glow in twilight conditions unless the sun reflects off the glass end but that round be white light not red.
living a stones throw from the Leeds MDC border at Lofthousehttp://tykebhoy.wordpress.com/
Top

Why don't you ask the residents to open their windows so that they direct the sunlight in your direction.
Some of them must be math students so they will probably enjoy the challenge.
Top

@WarringtonRhino it is the school of sport so not a maths student in sight. I also don't think any of the windows on that side open.
living a stones throw from the Leeds MDC border at Lofthousehttp://tykebhoy.wordpress.com/
Top

I'll have a look on the next sunny evening.

As it stands, I'm grateful for all the helpful comments when I first posted and now I'm relieved that I hadn't been failing to notice it before last winter.

As for requesting any form of signalling from students at the building, had I been able to communicate with them easily, I'd not have had to ask on here.

It's been a sunny evening here but the red-clad building has not been at all conspicuous. White buildings have stood out more and at about 9-15pm the reflection from the window of a block of flats was so bright it blotted out much of the view. At least I'm happy that it's only really conspicuous around sunrise in winter months and not at other times.
Top

In the continuing tale of what can be seen out of our back bedroom windows, within the last couple of days two really bright red roofs have appeared on a building site in Wortley. This image doesn't really show how much they stand out, partly because I had to reduce the file size to get it to load. This isn't red like terra cotta roof tiles but really bright red. It may be some sort of layer which will be covered with tiles, in which case it will disappear just as quickly Probably to do with this https://westleedsdispatch.com/heres-wha ... look-like/ Just off the ring road east of the reservoir and Tong Road
living a stones throw from the Leeds MDC border at Lofthousehttp://tykebhoy.wordpress.com/
Top

tyke bhoy wrote: ↑
Sun 13 Jun, 2021 10:01 am
Probably to do with this https://westleedsdispatch.com/heres-wha ... look-like/ Just off the ring road east of the reservoir and Tong Road

Bingo! (Or should that be "House!" in the circumstances?) Thanks for helping me with this. From that impression of what it will eventually look like, bright red roofs may be a bit incongruous so something with a more traditional appearance may go on soon.

The daft thing is that I'm very familiar with that part of the world but working out what's what from a distance isn't always easy. We were in that general area only on Thursday morning, going from Gildersome to the Aldi on Tong Road.

It's good to see that something built by people who intended it would last a thousand years is being renovated for a modern purpose.
Top
Post Reply
26 posts