I recently acquired a colourised postcard, entitled Police Institute, Leeds. It is postmarked (in Bridlington) on 12th July 1910. I have tried researching this building, to no avail. I assume that it was located somewhere in the city centre, but looking through various sites to try and identify it from maps and aerial photographs has not assisted at all, so far!

I wondered if anyone here could provide me with any information, such as where this buildings was located, dates, etc.

With thanks in advance.

A bit before my time. I'm pretty sure there's a bit about this in the history of Leeds police. I'll dig out my copy later when I have some time. In the meantime, if you have access to a scanner, somebody may recognise the building from more recently.
Top 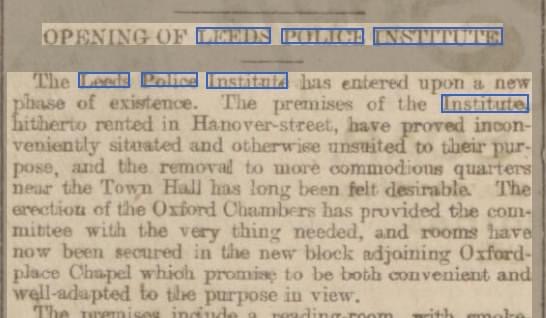 It would appear to depend on how old the Postcard was when it was sent.

I think I've been confusing this with a boys club run by members of Leeds City Police which was aimed at occupying teenagers with activities like boxing. I' have a vague memory that this may have been a predecessor of places like Attendance Centres where juvenile offenders were ordered to spend time by juvenile courts.

I've now checked with my history of Leeds police and I cannot find anything about this. Bearing in mind that the book covers around 150 years, the amount of space devoted to individual topics or events is small, it's possible I've overlooked it. I've confirmed from it that the boys' club I mentioned above was much later - more the 1950s.

It may be worth noting that the further you go back, the greater the control of the police by Leeds City Council and this may have been a Council institution.
Top

I think that the centre, which you were referring to, was the one located in a building on Berking Avenue, off York Road. In the 1960’s, I seem to remember that it was run at weekends by staff from the Training/Juveniles Departments such as Roy Foster, Ted Crutcher and Joe Lee. There are references to it on Leodis (under Berking Avenue) but mainly in the ‘Comments’ sections.

You are spot on with that.

uncle mick is obviously on the money with the Leeds Mercury but the bit shown mentions the purposes of the building without really saying what they are. I can make out "reading room" but it's not clear who was going to be reading. Being handy for the Town Hall is mentioned but I wonder whether this has been some sort of recreation / learning facility for the police or something aimed at people appearing in court in the days before the probation service. The Oxford Chambers etc buildings had - and may still have - quite a large hall. On a personal note, I "passed my classes" there in September 1969. (Leeds City Police jargon for being successful in the promotion exam.)

Re uncle mick's link to the postcards, I see one of them is LEEDS THE OLD GRAMMER SCHOOL. You couldn't make it up. Thanks for that glimpse into how society has changed. Various snippets caught my eye in my Leeds Police history book as I was looking for anything about these premises and one was a campaign for the police to have two days off a month instead of only one.
Top
Post Reply
15 posts