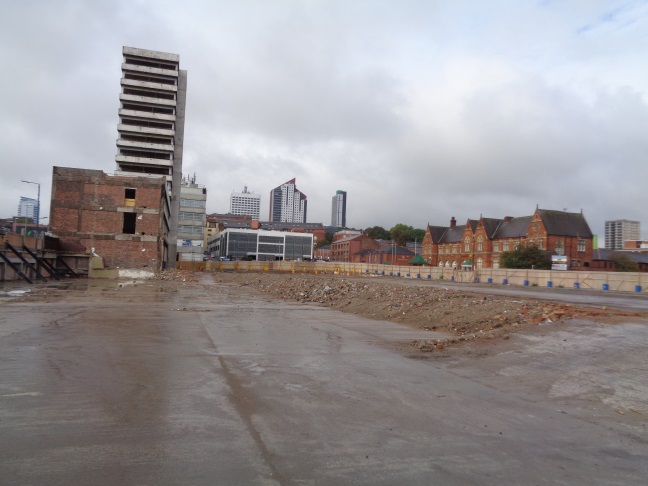 Was this not the area that was originally earmarked to be the new shopping mall, John Lewis etc. ?
Top

PS. Reginald Blomfield was the architect behind the redevelopment of The Headrow area in 1928-1932.
A rainbow is a ribbon that Nature puts on when she washes her hair.
Top

Apologies Leodian i was confused regarding which Gas Board Building.

Regarding the new development still to come my friend had a tailoring manufacturing business on the corner of Templar Street / Place and about five years ago were given notice to quit, this came in the form of complete relocation lock stock barrel to newer premises on Roseville Road plus three year free rent and lease.Most of the red bricked buildings around him were owned by Chinese, Wholesalers etc. and he informs me that they received a very hefty payment to vacate virtually all one side of a street. He also told me that the plans which were shown mentioned the John Lewis development and the contractors were laying large quantiities of electrical power cables in the Templar Street car park and when he enquired what they were for, was told the J. S. store. devlop.
When i used to visit him at his old factory we often went for a coffee in the snooker centre a couple of street higher up, the owner also had a restaurant above and the pay out he received was enough to let him retire.
All in all i am more than a little confused and can only think that there was a change of plan somewhere along the line and this Templar area is to be included at a later date.
Sorry to be a little vague but am getting this info second hand.
Last edited by volvojack on Sun 16 Oct, 2016 5:56 pm, edited 2 times in total.
Top

One of my sons used to be a regular at one of those Chinese wholesalers and through him, I got exactly the same tale.
Top

From memory the credit crunch drastically scaled back the initial development of what is now known as the Victoria Quarter but as Leodian's recent link shows was originally planned to be the Harewood quarter. There may well be a phase II development which will see the, originally planned, disappearance of the northern "bookend" on Eastgate and expansion across Lady Lane but at present most of the land/property is presumably sitting in the developer's "landbank" courtesy of the initial compulsory purchases.
living a stones throw from the Leeds MDC border at Lofthousehttp://tykebhoy.wordpress.com/
Top

Thanks volvojack, jma and tyke bhoy for your appreciated inputs

A mention of Templar Street reminded me of a recent report about counterfeit goods being seized from a site on Templar Street (this is a link to a related report dated October 6 2016 in the Yorkshire Evening Post website:- http://www.yorkshireeveningpost.co.uk/n ... -1-8167515). I had thought all of the premises in that area were sealed off, but clearly that was not the case. When I was passing by in the area last Tuesday I noticed there was a police presence, so presumably related.
A rainbow is a ribbon that Nature puts on when she washes her hair.
Top

Wasn't the idea to create another square or 'events space' down there? Along with shops and cafes? I remember an artists imprexion of the church fronting pavement cafes etc. I think some work was done on the church to prepare it for redevelopment.
Top

Having spoken to my Friend again ( who had premises in Templar Street) it seems that the owners of most of the area around his factory were also the owners of the Merrion Center. He reckons that they must have paid out millions of pound to the businesses to the businesses in the Templar area. His health is not good plus his memory is failing on some matters but he does recall that there was a model of the proposed development for the whole of that area in the Leeds planning Dept. also pictures were published in the Y. E. Post clearly showing J.S. shop and the some sort of canopy over to Eastgate and that it was the RIGHT hand side that was to be demolished....... Is this possible.?
Top

Jack your friend's memory may be failing but not on this. If you follow the Harewood Quarter link Leodian posted a couple of days ago then you will see the development area is bounded to the south by the bus station and market, to the east by Eastgate from the roundabout to the inner ring road (A64/A58m), to the north by said inner ring road and with the exception of a little bit to the west by Vicar Lane. The plans certainly had Eastgate pedestrianised from Vicar Lane to the roundabout and covered in places by a canopy. As I posted earlier the credit crunch meant the plans were scaled back and fortunately before major demolition took place (otherwise we could have ended up like Bradford with a great big hole for a decade). I'm sure phase II will happen at some stage but again probably not on the scale of the original design and probably a few years down the track when Victoria Gate has had full occupancy or close to it for some time
living a stones throw from the Leeds MDC border at Lofthousehttp://tykebhoy.wordpress.com/
Top
Post Reply
30 posts