Work has started on demolition in at least some of the area where the long vacant British Gas offices very tall building is next to New York Road in Leeds. It does look as if that building may be being demolished, but I've seen conflicting reports with some stating it is to be renovated and become an hotel and that a related area by Gower Street will eventually also have other facilities.

The building was the offices of the North Eastern Gas Board before becoming under British Gas.

To give an impression of what is going on these are 3 photos I took on August 16 2016. The first is a view looking along Bridge Street to the New York Road flyover (that there is demolition going on is not obvious from that angle). The second is a view from Bridge Street (near where Trafalgar Street comes off). The third is a view from Gower Street.

Views particularly from Gower Street show that a lot of clearance has already happened and that there will be a large area available for whatever use(s) the site eventual has done. 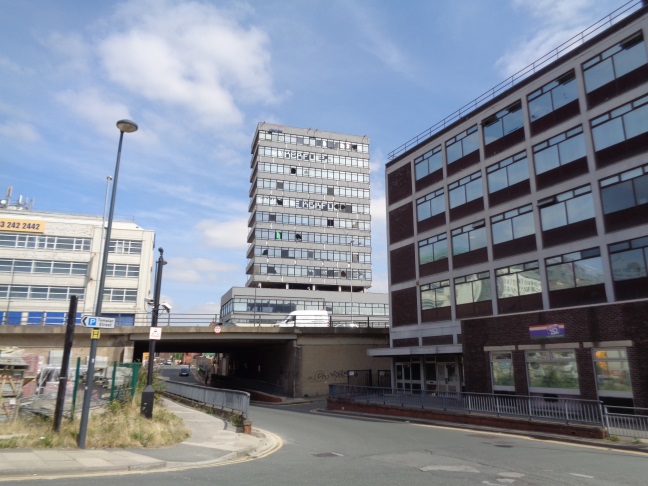 Great pictures Leodian, The man driving the Digger in picture number 2 does look like he may need more than a hard hat if he keeps on going forward.
Top

In the 1960s in my local W.M.C. in Beeston there was a man who worked at the Gas Board in Gower St. and every so often he would come up quietly on an evening and furtively slip you your Gas Bill as though he was doing you a favour.. I recollect that he nearly came to blows on a couple of occasions with lads who preferred it a week later through the post. On reflection he was not a full shilling.
Top

Regarding the possible development of the area this is a link to a report (dated August 22 2016) in the Yorkshire Evening Post (YEP) website http://www.yorkshireeveningpost.co.uk/n ... -1-8080575

The report is also on the front page and page 4 of the printed YEP.
A rainbow is a ribbon that Nature puts on when she washes her hair.
Top Thanks LS1 for that interesting link and photo.

I've looked at a 1908 map in the Old Maps UK website and hoped to reproduce the immediate area. I know I used to be able to copy and paste an image then save it in a jpg format but I cannot now work out how I did that!
A rainbow is a ribbon that Nature puts on when she washes her hair.
Top

These are 3 views of the area that I photographed on August 23 2016. The first is from New York Road (by the flyover, off on the left). The second is from Regent Street near the junction with New York Road. The third is from Bridge Street. PS. The second photo makes it look like the building is slanting a lot but that was not so (it's probably an effect due to the way I held my camera).
A rainbow is a ribbon that Nature puts on when she washes her hair.
Top

Thanks for that side-by-side modern/old comparison LS1

That facility is extremely useful. It also shows just how densely built and presumably heavily populated that area used to be.
A rainbow is a ribbon that Nature puts on when she washes her hair.
Top

This is a view of the former British Gas office taken from Bridge Street on August 31 2016. Compared to the view in the image taken on August 16 2016 (see the first post in this thread) all of the windows have now been 'removed'. The bridge over Bridge Street is under New York Road. A rainbow is a ribbon that Nature puts on when she washes her hair.
Top
Post Reply
30 posts