As you walk on the footway by the road that runs over the River Aire in the Dark Arches you walk over very many bricks that have 'Electric' on them. They might simply be covering electricity cables but that may be unlikely on safety concerns. I wonder therefore if there was a local brickworks that produced 'Electric' bricks'? I've done some searching but did not readily find any relevant result.
A rainbow is a ribbon that Nature puts on when she washes her hair.
Top

The station underground area contained a high tension sub-station in an arch, and two stand-by generator sets which automatically started up following any power failure in another srch. They were set to start within a few seconds of any problem. Both provisions were maintained by the department which I worked for throughout my working life. Electricity was also required in the area of the station bounded by the river and the canal. There is no problem with running electricity supplies underground, or under roads, provided rules are followed. It is likely that the bricks were laid intentionally to warn road repair teams to be careful
Top

Thanks Jim for that very interesting information

) it would be of interest to show the 'Electric' bricks so these are 2 photos that I took on September 6 2018. The first is a close-up of some of the bricks and the second shows the footway and roadway that cross over the River Aire in the Dark Arches, Leeds (the bright lights change colour regularly and have been a feature in the Dark Arches for some while now). There follows 3 photos that I took of embedded bricks in tracks in a public access part of Harewood Estate during a walk on September 24 2018.
I wonder if anyone knows what the first brick has on it as the first part of the name on it seems to state 'Norm' but I could not make out anything after that even when closely examining the brick in the ground. Perhaps it could be 'Normal' but 'Normal Brick' just seems unlikely a name though that might have been used on very basic bricks. I don't think it is what is left of 'Normanton' as there does not seem enough space for such a long name. Help will be appreciated. The second brick clearly has 'Hemsworth Brickworks' on it and the third has 'Whitaker Leeds'. 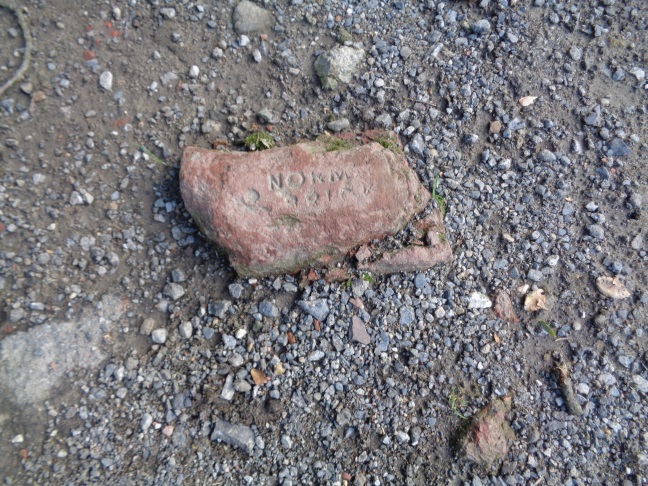 I haven't been on here for a long time

The Brick is Normanton
Brick Co.

Look on Penmorfa Bricks website for listings of bricks.

Keep your eyes peeled and when you find a make you don't recognise look it up on there!!
Top

I haven't been on here for a long time

The Brick is Normanton
Brick Co.

Look on Penmorfa Bricks website for listings of bricks.

Keep your eyes peeled and when you find a make you don't recognise look it up on there!!

Thanks The Parksider for your help which is appreciated

. I guess that the brick in question used to be longer and so had the full name on it.
A rainbow is a ribbon that Nature puts on when she washes her hair.
Top

Thanks The Parksider for your help which is appreciated

. I guess that the brick in question used to be longer and so had the full name on it.

The brick length and the letter width often varied, until you see a full brick it's hard to judge what you have if you only have a part of a brick. If you go on Penmorfa Bricks on their website you can browse through and pick up on all the Leeds Bricks. There are many of these from many sites in leeds.

Many of those sites were never built on because they were deep claypits backfilled with ashes and loose rubbish. Nowadays when land is scarce and building techniques advanced they can build on old claypits. They have built on the old Royal Park brick site of Johnson and Wroe. These bricks built the houses in the woodhouse, Burley and Royal Park area.

They are marked J & W but just before they built on the site, just after they had removed all the old car scrap there was a pile of Bricks and i found one marked O & L. It appears on Penmorfa as a unidentified "Mystery Brick" so it was fun to discover. I suspect some partnership like Oldroyd and Longley originally founded the site.

If you love wandering around Leeds with your camera at the ready to picture glimpses of the past then always look at the bricks and see if you can't spot an example of every Leeds brick Penmorfa notes and illustrates.

Now the funny thing I found was that even though there were around 30 brickmakers in leeds you can find many bricks from outside Leeds especially from the mining areas like Bradford, Castleford and Wakefield. HOWEVER sometimes it is a shock to find bricks that are from miles away.

I found an old half brick in Buslingthorpe that started with the letter "E" (can't remember what else) and could not identify it, but Derek Barker who is an expert traced it to Scotland. How the heck it made the 200 miles to Leeds I do not know.

Try Penmorfa Bricks and you will see Leeds bricks turning up all over the country. How and why they got to some of these places is a real mystery.

Finally the remains of Scholes brickworks are a delight. The two claypits are still there (but flooded) the area between housed the kilns, and the old Leeds-Wetherby line runs alongside so I would guess some brick built Wetherby houses are constructed with Scholes Bricks. This was run by Issac Chippendale & son - again see their bricks on penmorfa.....
Top

Go to the fifth brick pictured on this link, if you can't link in directly google Penmorfa Bricks website and open English bricks starting with "F" (For Farnley)

Fifth brick down I would kill to own. How it ended up where it did i dunno....
Top
Post Reply
46 posts