It's certainly a shocking subject indeed. I never forget the impact the hanging scene from the film 'Let him have it Chris' had on me when I first saw it years ago. It's the true story of Derek Bentley and Chris Craig. It brings it home just how terrifying it must have been for the condemned man.That film clip is on youtube herehttp://www.youtube.com/watch?v=uYbEjy3Y1_I&feature=related
My flickr pictures are herehttp://www.flickr.com/photos/phill_dvsn/Because lunacy was the influence for an album. It goes without saying that an album about lunacy will breed a lunatics obsessions with an album - The Dark side of the moon!
Top

I know that the Armley area was bombed during WW2 but I wonder if there is any record of if the prison was a target or not? It could have been of strategic usefulness to bomb it just enough that many inmates would be able to escape with the hope that (as criminals) they would then cause problems in at least Leeds.
A rainbow is a ribbon that Nature puts on when she washes her hair.
Top

Armley Gaol, 28th March 1948.Several bomb sites can be seen on this RAF vertical aerial shot, including the cleared site of the congregational chapel at the top of the Stapletons, and the end semi-detached (?) house by the gaol, being rebuilt at this date.Incidentally, my office window (when I worked on Brancepeth Place) had a perfect view of the gaol.Click on the red X to view. Interesting how the interior of the prison wall is left blank on the 1906 Godfrey OS map, presumably for security reasons.On the right hand edge of the map is the congregational chapel mentioned previously, but the site of the semi-detached houses is undeveloped. 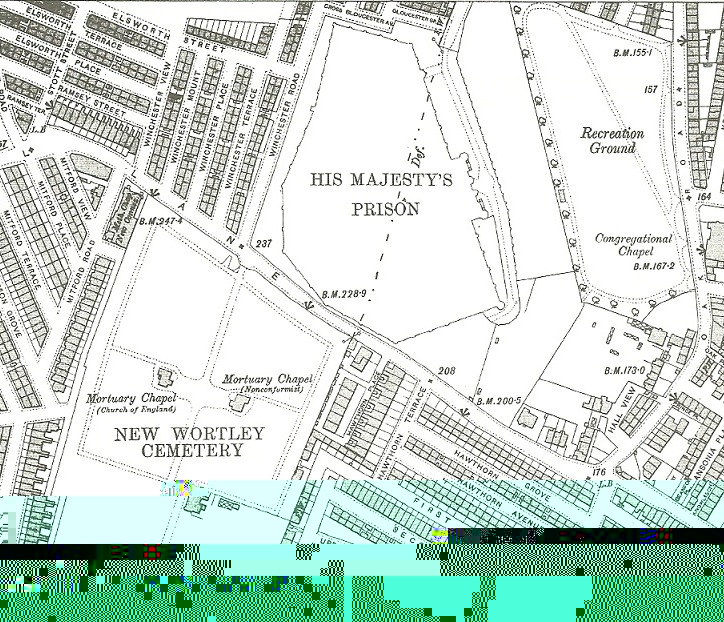 Comparing Si’s RAF aerial shot and more modern photos of the prison, I was wondering where abouts in the prison the victims of capital punishment were buried. Seemingly, during the 19th and very early 20th century, they were always buried within the prison precincts. While there doesn’t ever seem to have been much room within the walls, there is now much less than ever there was. Would they have been exhumed and re-interred elsewhere?
http://www.flickr.com/photos/liits/
Top

Were'nt the bodies of hanged inmates buried in quicklime to "disolve" the bodies and bones so there would be no remains?Also, when I was very young me dad used to sing a song to me called "The ballad of Armley Gaol". I can only remember the last verse which goes something like,So when you're free and roaming round the city,And see the postman with his bag of mail,Open up your heart and show some pity,For the lads who sew the bags in Armley Gaol"If anyone knows the rest please post.
The longer we live the older we get
Top

Charles Peace must have been quite infamous for quite a while after his time. He gets a mention in George Formby's ditty "Running round the fountains in Trafalgar Square" which I assume was recorded in the '30's.
Top

It's certainly a shocking subject indeed. I never forget the impact the hanging scene from the film 'Let him have it Chris' had on me when I first saw it years ago. It's the true story of Derek Bentley and Chris Craig. It brings it home just how terrifying it must have been for the condemned man.This case makes me so angry. They knew Bentley was "backward" (sorry, I don't know what the current PC term is) yet the law still had to have its pound of flesh, probably because it was a copper who was shot. I wonder how Craig has lived with this all these years?
Top