Here's a bit more about Brian Bolus:The schoolyard at St Michael's was roughly triangular in shape. At the Kendal Lane end some nets used to be erected for cricket practice. A piece of rush matting was laid on the concrete surface as a concession to 'safety'.I used to watch Bolus taking guard in those nets wearing only pads and gloves but no helmet. A very lanky lad called Simpson armed with a proper cricket ball and bowling at terrific pace - sometimes full tosses and beamers which could have killed the batsman - didn't seem to trouble Bolus who never flinched. Occasionally the ball would be walloped clean out of the nets and down the yard where hundreds of kids were milling about. I don't remember anyone getting hurt or complaining about the danger. These days, the Health and Safety people would close down the playground as a threat to life and limb.
Top

Of course today is Michaelmas. We were always marched off to a school mass at Michaelmas.
Nostalgia isn't what it used to be.
Top

Twicetwelve wrote: Remember                     Benediction in the tin chapel and Edna Creek bashing away on the harmonium at the back, with the aroma of chips lingering from the nearby kitchen Edna Creek was also a music teacher during my spell at Moor Grange School from 1960-62. We didn't suffer the harmonium bashing (sounds painful). Her delight during lessons was to have everybody constantly singing the doh-re-mi scales in "na-noo,na-noo" style. It used to drive us nuts. She was weird!
Top

jdbythesea wrote: Edna Creek was also a music teacher during my spell at Moor Grange School from 1960-62. We didn't suffer the harmonium bashing (sounds painful). Her delight during lessons was to have everybody constantly singing the doh-re-mi scales in "na-noo,na-noo style. It used to drive us nuts. She was weird! Miss Creek: At St Michael's, I don't remember that anyone liked her. She had no sense of humour. Her spasms of shrieking could be triggered off by the mere existence of certain pupils. Music lessons, held in the dining room but partitioned off from the kitchen, were especially entertaining when the clatter of the dinner ladies put Miss Creek into a vile temper.
Top

A bit of internet research suggests that C.J. Feetenby may be the crossword compiler Corylus. That would make sense.(Sometimes I wonder if I'm mentally ill.)
Top

Wow, great to read some of the posts as a new member.I had a walk around the schoolyard one saturday morning in 2005 on a trip across from Australia. Caught up later that night with some old school pals from the mid to late sixties.Some of the teachers were ok, some prats.Nobby Walsh was a bit sadistic, i remember Brian Mundell who was leaving to take up a contract with Leeds United waiting for him after school when he left and goading Walsh into a fight. Incredible scenes and to Nobby's credit he just kept walking with a hoard of pupils egging Brian on. When we had sport in winter at Cookridge if Nobby was the ref he had this warped idea as you ran around in the game of whacking you with a piece of fine birch branch if you ran by him. He would be arrested now if he did that.Father Campbell was brilliant as was Alan Caulfield and Tom Atkinson PE.Remember Cassidy the chemistry teacher, he didnt like it when we would set fire to the fixed bunson burner gas in class.Phillips the music teacher was good too and Burns the geordie biology teacher was ok apart from the assault on Rawson when he chipped back once too many in class, slapped the [edited for content] out of him and threw him out..happy days.Maggie Hall was our older woman fantasy, some sickos who sat at the front would drop their pens to have a look up her skirt.Sister Edwards was a scary jesuit as we called him, confiscated an air rifle i brought in to sell for a mate, it was naive of me to be shooting pigeons from the class window at the time.I remember a pretyy french teacher who was there in the last days as an exchange teacher, we would walk around sniffing her perfume in the corridors. Fr Hewitt was another i remember, he would carry a small collapsible brolly around and give you a playful tap on the head and say, this is my youth "club'. Early years Fr Woodhall took some stick as he was a bit weak, always rode his cycle for miles. Rode from Leeds to Horsforth to see my parents for a friendly visit as he would often do. All in all they were great days and its sad to see the place closed down. Be nice to hear from any old mates on my email... Stuart Kamasz [email protected]
Top

Your posting brought a flood of memories back Stuart. As I remember Burns had said to Rawson that little things please little minds and as the class gasped in disbelief Rawson replied 'Yes Sir and they also say while bigger fools watch on'. Poor Pete didn't know what hit him.I always used the staff nicknames when telling tales at home and I remember my mother came home from parents evening one year wondering why Mr Jasper had been so short with her. She disliked Cassidy more than I did.In the main the staff were caring and professional - I certainly feel that I was very lucky to be educated there.I tried your email address Stuart but it was returned. I am Pat Pearson - Paddy back then. My address is [email protected]
Top

Speaking of Maggie Hall, there is a pic on Friends Reunited. 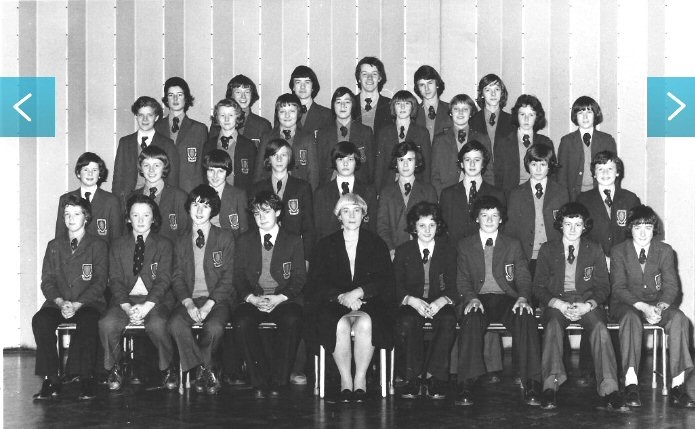 Just spotted this thread. I was at St.Mick's from September 1943 to September 1951 (yes, I did go back after the summer holidays but had poor prospects of improving my summer exam results and left to do my National Service).Of the teachers mentioned I remember a good number, too many to rename them all here.There was a person who was never a teacher, namely Fr Jones the Rector and Director of the College. He had a Secretary called Miss Hall (if my memory does not fail me) who did not teach.With Fr. Doyle, we had our Sixth form Latin classes in his office.My memories of Fr Ryan are not good. In the Third form we started Greek during the last term. All the group, except me, jumped the Fourth form and went straght to the Fifth, a custom for advanced pupils at that time. I was born at the end of February, so very young and did not jump. I did the full Fourth form without Greek and When I gor to the Fifth I met up with a group who did the jump and Fr Ryan persuaded my mother to get me to resume the Greek, which I did not want.As regards Brian Bolus, we were friends at Whitkirk Cricket Club and in 1948 we played in the same Scratch Eights team that won the Final. 7/6d was the prize money, which we split 5/- for the winners and 2/6 for the losers.Another teacher I remember was Mr McDermott, aka the Ax, because of his hachet looking face. He came to sxhool on a motorbyke.Coming from Crossgates, I used to get the 57 or 58 bus up to school, but in the early years, used to run like hell down the 99 steps to catch the bus. Other times we went to Wellington Bridge to get the tram back home. In later years we used to run like greyhounds to the Central Bus Station to catch the Yellow Bus Kippax and District) that left at 17 min. past the hour That was before the Stanks bus service wes restored.In general, I do not regret going to that College.
Top
Post Reply
93 posts