Bunkers, shelters and other buildings
Post Reply
5 posts • Page 1 of 1

Upto 5 or 6 years ago(?) there were 2 strange iron structures on Queen St.They were approx.6 ft. high(OK then 2 metres) by 2ft.in diameter.They tapered slightly towards the top where there appeared to be some sort of ventilation grill.I think they were painted 'Battle-ship grey'most of the time.I only ever noticed these 2 in Queen St. nowhere else.I'm hoping Phill d has a picture of one(possibly from the inside!!)
Top

Which queen street there are several
Top

Queen Street LS1 I think. As far as I know there is only one on Queen Street, painted as you say battleship grey. The other is on Northern Street, and painted a lighter blue.I've heard that these are ventilation points for electricity cable tunnels. Given their proximity to the site of the old power station (and current sub-station) this seems likely. The cable tunnels were/are large enough to walk down and are probably the source of many of the city centre "tunnel" rumours.The blue vent in Northern street was damaged during the nearby construction work (and not fixed shame) and it was possible to stick a camera down into it. All it showed though was another metal cover. And seeing as we can only post one image per message (??!!) here is the one on Northern Street. 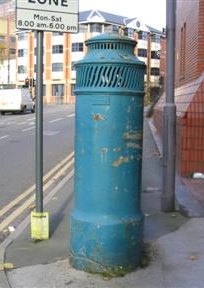 Thanks for clearing that up Rikj.I knew someone would know!
Top
Post Reply
5 posts • Page 1 of 1