I am not making a political point here but I read somewhere that if relected the conservatives would style themselves the government of "Thrift". It occured to me that "thrift" had gone out of fashion and hardly anyone uses the word nowadays.I vaguely remembered that as a child in Leeds there was a "Thrift Store" on Harehills Lane. I did a search on Leodis and sure enough my memory was confirmed by a photo of the shop on the corner of Foundry Lane and Harehills Lane, just opposite the Compton rd Library.http://www.leodis.net/display.aspx?reso ... LAY=FULLWe tended to use the Coop so I probably didn't go in the Thrift very often. Anyone else remember it. Was it part of a chain and was it a direct competitor of the Coop? Maybe its time for the Thrift to make a comeback?
It used to be said that the statue of the Black Prince had been placed in City Square , near the station, pointing South to tell all the southerners who've just got off the train to b****r off back down south!
Top

their HQ was the BHS building in Kirkstall(formerley Allders/Clover). they had many stores in Leeds - tended to be small corner shop type. they missed a trick with the advent of supermarkets and wound up c 1970 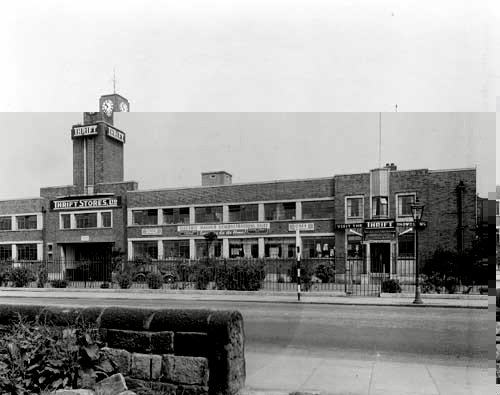 I SEEM TO REMEMBER ON BEESTON ROAD THERE WAS A THRIFT STORE THAT WAS IN THE EARLY 70S IT WAS NEAR THE CROSS FLATTS.
Ex Leeds Lass
Top

There was also one in Kirkgate Market in the 1960s, in one of the aisles between Butcher's Row and Game Row.
Top

Wasn't there one on York Rd, on the parade of shops near the Melbourne pub?
http://www.flickr.com/photos/liits/
Top

There was a Thrift Stores on South Queen Street in Morley, I wonder did they just cover Leeds and West Riding or were they a national company.BTW Thrift was pictured on the pre 1953 brass threepenny pieces There was a Thrift shop on Yeadon High St. The lady on the till had the biggest beehive hairdo I've ever seen.
Top

If I remember correctly they sold "dry goods" biscuits, and stuff in tins. Sugar perhaps and dried fruit, but not butter, bacon or boiled ham. There was another grocer's at the bottom of South Queen Street in Morley - they had another branch on Queen Street too called Gallons. I'm not sure whether they were peculiar to Morley or more widespread - but they did sell butter - Danish in huge barrels, they used to slice it off and weigh it out in greaseproof paper. They also sold ham and bacon and bread - a proper grocers.
Industria Omnia Vincit
Top

Gallons shop in Yeadon too! most folk called it Gallonses.There was also a shop called Stop and Shop which sold everything from bacon,tea etc to toys. It was stacked to the gunnels and always had a strange smell! I'm not sure but I think the person who owned it also had a place in Leeds market. My grandma always said they were Jewish? Another grocers shop was called Paramount stores,don't know if it was a one off or part of a group of shops.
Top

There was a Gallons store on Selby road Halton, which I can remember my aunt taking her order in and the delivery boy fetching it on Saturday morning. There was also a Meadow Dairy on the parade of shops in Stanks, which was also like Gallons, they carved ham from the bone,butter and cheese was took from the big slabs.
Ex Leeds Lass
Top
Post Reply
57 posts